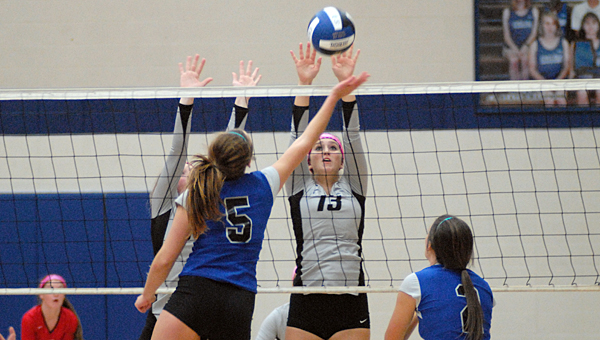 “We got lax after the first set,” said Thompson head coach Kellyanne Gandy. “Our serve-receive broke down (in the second set).”

Thompson took an early 6-1 lead and appeared to be on their way to a match win. However, Chelsea was able to take advantage of nine Thompson errors including one to give the Lady Hornets the 15-13 third set victory and a 2-1 match win.

“We jumped out front and lost ball control,” said Gandy. “We showed our youth at times.”

“They (Thompson) had some unfortunate errors,” said Chelsea head coach Jamie Gill. “We took advantage and played a consistent game.”

Chelsea began the three-team match with a 25-22, 19-25, 5-15 loss to Clay-Chalkville. Turner had four kills, three aces and seven digs. Campbell had six assists and seven digs while Cotney led the defense with 10 digs in the loss.

The Warriors closed the second set on a 7-1 rally to even the match and broke away on a 7-0 run in the third set to take the match.

Kylie Beaubien and the Spain Park volleyball team will host the Dig In the Park Tournament on Oct. 6. (File... read more