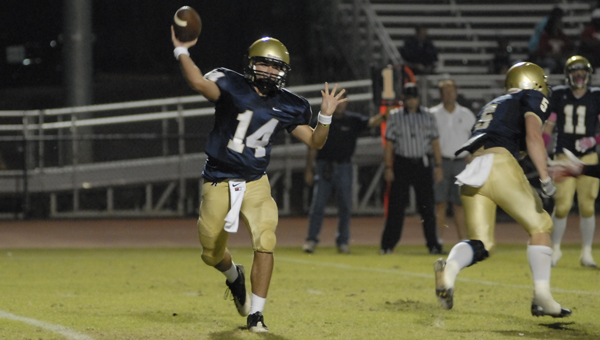 Briarwood quarterback Chandler Wilkins drops back to pass against Ramsay in the Lions 42-12 win over the Rams on Oct. 6. (Reporter photo/Graham Carr)

“We protected the ball better,” Yancey said. “We didn’t turn the ball over much and kept fighting hard.”

“Daniel Robert made some really good catches for us,” Yancey said.

Junior Ethan Simmons scored the Lions first two touchdowns, one on offense, one on defense.  Simmons first score was a 3-yard touchdown run 5:34 first quarter and a minute later, Simmons intercepted a Talladega throw and raced 45 yards for a score.  Wilkins found senior receiver Robert for a 38-yard touchdown pass with 1:05 left in the opening quarter, to extend the lead to 21-0.

The only score of the second quarter came when senior linebacker Barnes Bankston recovered a Talladega fumble and returned it 18 yards for the score to extend the Lions lead to 28-0 at the half.

Talladega finally ended its 13 quarter scoring drought with a touchdown run in the third quarter.  The Tigers had not scored since the first quarter of their 23-6 loss to John Carroll Catholic in the Tigers third game of the season

Wilkins found Robert for another 38-yard touchdown pass with 5:10 left in the Lions only score of the third quarter.

Talladega added another touchdown run in the fourth quarter to close the gap to 35-12.

Briarwood put the game away with a 21-yard touchdown reception by Andrew Schaper with 3:43 left in the game.

The Lions now move into a tie for fourth place in Class 5A, Region 4.

FROM STAFF REPORTS MONTEVALLO – The University of Montevallo baseball team will take on a challenging 50-game schedule in 2013,... read more