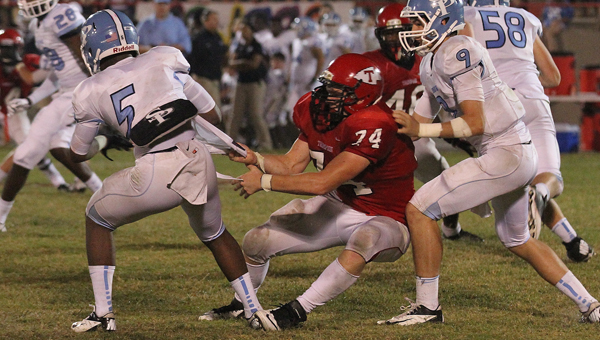 The Warriors' John Thompson makes the tackle on Spain Park's Otis Harris in the backfield for a loss in Thompson's 36-21 loss on Oct. 5. (For the Reporter/Eric Starling)

ALABASTER – The magic ended in the fourth quarter for the Warriors as their bid to upset Spain Park at Larry Simmons Stadium fell short and they dropped the contest 38-21.

The Spain Park defense had a hard time adjusting to the Warrior attack on the first drive. Three plays into the game and Thompson was knocking at the door having moved into the red zone. The drive would stall at the 6 yard line and the Jaguars blocked the field goal attempt by Thompson.

The Jaguars would also go down and miss a field goal attempt, and later intercept a Trey Matherson pass in the end zone as the Warriors had another opportunity to put points on the board.

Just like last week’s game against Shades Valley, the defense was responsible for putting the first points on the board. Facing 2nd down and 3 yards to go, the Jaguars quarterback passed across the middle was intercepted by Blake Lewis streaked down the right side line to pay dirt. A David Buckelew extra point made it 7-0 Thompson as the second quarter got underway.

Thompson’s defense would hold Spain Park to a three and out, giving the Warriors good field position for their next drive. Unable to get a first down on 3 rd and 7 at the 50 yard line, Thompson elected to punt. The Jaguars blocked the punt and returned the ball for a touchdown to tie the score.

“Our guys put up a heck of a fight tonight, but we continue to work on learning from our mistakes,” stated Coach Michael Montgomery. “We are working towards playing mistake free, and we continue to grow each week.”

Those mistakes hurt the Warriors in the second quarter and forced them to play from behind the rest of the night. A dropped punt return by the Warriors gave the Jaguars the ball deep in Warrior territory and the Jaguars capitalized by scoring on a 14-yard pass play. A missed extra point left the score at 13-7.

The Warriors put together a 12-play drive on their next possession culminating in a 9-yard pass from Matherson to Hayden Franklin for the score. Another Buckelew extra point and the Warriors were up by one.

Just as it looked like the Warrior defense would hold Spain Park scoreless the rest of the half, an unsportsmanlike conduct penalty put the Jaguars on the 9-yard line of the Warriors and with :21 seconds remaining, the Jaguars punched it in for a 21-14 halftime lead.

Spain Park would move out to a 28-21 lead in the third quarter, but Thompson responded quickly. Starting at their own 20-yard line, Matherson called his own number and bolted down the side line 76 yards before being caught from behind. Dee Tolbert then took the snap in the wildcat formation and took it in for the score. Tolbert finished with 98 yards rushing.

“Trey managed the game well tonight, and has shown lots of growth and poise in this game,” said Montgomery. Matherson finished with 77 yards rushing and 145 yards passing.

The Jaguars would add another 10 points in the fourth as the Warriors struggled to get in the end zone driving into the red zone two more times.

Defensively for the Warriors, Akeem Manzano led the team with 6.5 tackles and Hunter Pinneo added six tackles and one interception.