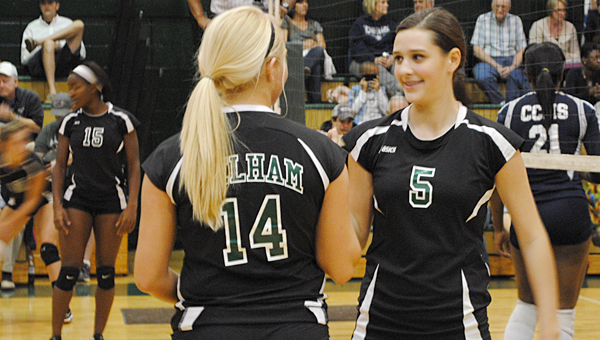 Pelham senior Katy Gustafson subs in for Lauren Bass in the Panthers 3-0 win over Clay-Chalkville on Oct. 9. (Reporter photo/Clayton Hurdle)

PELHAM – In their final home match, all five Pelham seniors contributed to a 3-0 win over visiting Clay-Chalkville.

“That’s the first time we’ve really beat down on anybody,” Smith said. “We had a lot of energy and had some nice support.”

In the closest set of the match, Clay-Chalkville and Pelham battled for momentum.  The Cougars gave out just enough to give the Panthers the two-point win.

“Clay-Chalkville is a good team and in that first set, they were pretty excited,” Pelham head coach Perry Robinson said. “We kind of took the wind out of their sails a little bit with that first win.”

The second set began in much the same way.  Clay-Chalkville pulled ahead to a 4-2 lead before the momentum shifted the Panthers’ way temporarily. The Cougars fought to keep things close and the game was tied at seven when the only Pelham senior yet to have played came out onto the court. Alexis Veal, who had sat the entire season out with a knee injury, came in to serve one ball. Veal’s lone serve resulted in a Clay- Chalkville point.

From then on the Panthers (16-15, 3-3) began to fight away from the Cougar attack.  Coming out of an 11-11 tie, Pelham outscored Clay Chalkville 14-3 throughout the rest of the second set.

“It’s nice when everybody gets to play and make a contribution,” Robinson said.  “I’ve only been with the five seniors since late May. They’ve been great to work with and open to new ideas.  What more can you want than that?”

The momentum was too much for Clay-Chalkville, who gave up a 13-3 Pelham lead to start the final game.

“We’ve worked for four years and now all our hard work has paid off,” Gustafson said. “It’s a little sad, but not too much because we know how much we worked.”