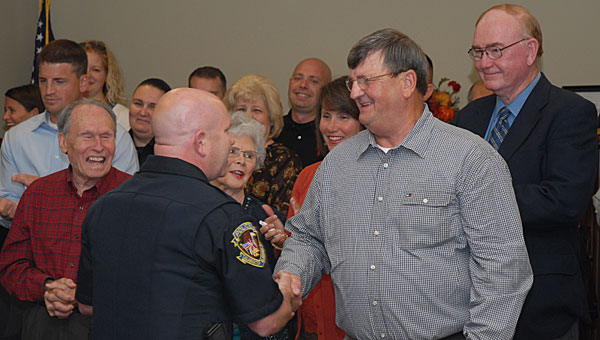 Oliver served for 40 years in law enforcement, and was the Alabaster chief for 11 years before he retired from the department on Oct. 1. Alabaster Deputy Police Chief Curtis Rigney said Oliver’s 40 years of duty was “the longest anyone has served in law enforcement in Shelby County.”

Rigney also said Oliver was the first Alabaster chief with a college degree, helped to start the city’s first school resource officer program and tripled the size of the department’s criminal investigation division.

“He started his career in the 20th century, but he will always be known as the chief that led this department into the 21st century,” Rigney said.

Shelby County Sheriff Chris Curry praised Oliver for his willingness to lend a hand whenever the county needed it.

“Stanley was always on top of everything that happened in the county,” Curry said. “He would call and say ‘What can I do to help.’

“Everything that happened, the offer was made,” Curry added. “That meant a lot.”

Oliver’s son, Stan, who is a deputy with the Shelby County Sheriff’s Office, said his father inspired him to enter the law enforcement field.

“My dad fearlessly and selflessly served the people of Shelby County,” Stan Oliver said. “He led me in the right direction by his own actions.”

During the ceremony, the department displayed a plaque in Stanley Oliver’s honor, along with framed collection of police badges from every law enforcement entity in Shelby County. Alabaster officers also purchased and presented Oliver with a $500 Bass Pro Shops gift card.

Alabaster Mayor David Frings said he frequently began his day by talking with Oliver, and praised him for his service to the city.