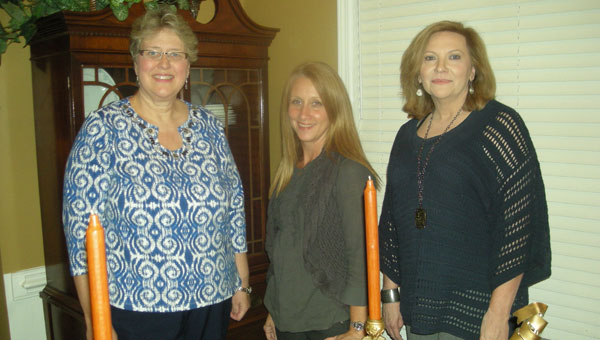 Hollie Cost presented the program at the October meeting of the Montevallo Evening Garden Club at the home of Beverly Hendrick. The topic of her program was “All About Town,” and she talked about the various activities and projects going on at present in Montevallo.

One of the projects she emphasized was Vallo-Cycle, a bike-share program initiated last spring. It is the only program of its kind in Alabama. Other ongoing programs were the city’s partnership with the University of Montevallo and Shelby County, and the downtown revitalization project.The active community involvement Cost referred to in her talk was a reflection of that spirit marking the history of the Evening Garden Club.

The club was organized in 1960 with the intent and purpose of serving the community by becoming involved in its special needs and by fostering the implementation of gardening and good gardening practices.

In the beginning there were 15 club members; of those Eleanor Brown and Sue Wilkinson remain active members. Today, the club with its 16 members is the oldest garden club in Montevallo.

Through the years club members have contributed time and energy toward the betterment of the community by planting and maintaining public areas, hosting parties in nursing homes and assisted living facilities, supporting the special projects of UM, Montevallo Elementary School, Reading is Fundamental, Shelby Emergency Assistance, and Parnell Memorial Library.

Special projects this past year included donating a bench, in memory of Linda Braid, to the Shelby County Humane Society, and also participating in the planting of a tree in Orr Park in memory of Homer Richardson.

The club’s next meeting will be Nov. 6 at the home of Marcia Sears. The topic of the program will be “Growing Grapes from the Ground Up.”