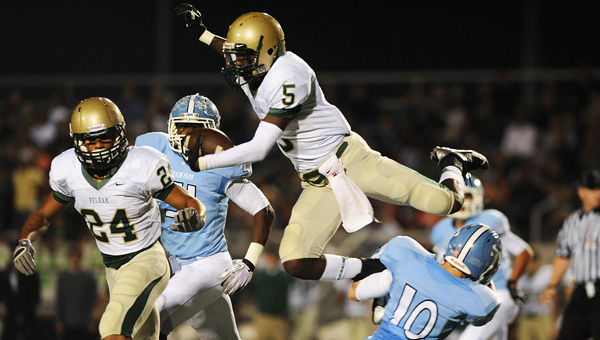 The Pelham Panthers will take their first trip to the playoffs since 2009 after thrashing the Spain Park Jaguars 42-17 on Oct. 26 in Hoover.

“Our kids did a super job of coming out and playing. It was a great team effort,” Pelham head coach Brett Burnett said while praising his coaching staff for the week of preparation leading up to the game. “The kids really rallied. I’m so proud of them.”

As Burnett started walking to midfield at the end of the game, his players chased him down and drenched him with the team’s cooler of ice water.

Leading rushers for the Panthers were Jacob Nichols, who recorded 141 yards in nine carries and Eli Beall, who finished the night with 125 yards on 31 carries.

The game came one week after Spain Park (7-2, 6-1 in Class 6A Region 4) clinched the Region 4 championship.

“They whipped our butts all the way around,” Spain Park head coach Chip Lindsey told his players after the game. “I’m going to do everything I can to fix it.”

After the two teams traded punts to start the game, Pelham jumped out to an 8-0 lead on a 46-yard run by quarterback Tanner Adams. Punter Austin Bowen picked up a botched PAT snap and connected with Tyler White for the two-point conversion.

After the Jaguars’ Thomas Taylor connected on a 47-yard field goal, Pelham scored on an 8-yard Beall touchdown run. A missed PAT put Pelham on top 14-3.

After a Taylor 47-yard field goal attempt went right of the uprights, Pelham scored again shortly before halftime on a 74-yard run by Nichols. Bowen’s extra point was successful.

Spain Park scored to start the second half when quarterback Nick Mullens connected with Jourdan Walker on a 20-yard touchdown pass. Taylor’s PAT brought the game to 21-10.

Pelham answered with back-to-back touchdowns on short runs by Beall, the second of which came shortly after Pelham’s C.J. Garner recovered a Mullens’ fumble forced by Panther linebacker Chris Coats.

Bowen’s pair of PATs gave Pelham a 35-10 lead early in the third quarter.

The Jaguars cut Pelham’s lead to 35-17 late in the third quarter when Mullens hit Walker on a 13-yard touchdown pass and Taylor’s extra point attempt split the uprights. The Jaguars then forced Pelham to punt the ball away on their ensuing possession.

After marching to the Pelham 9-yard line, the Jaguars’ drive stalled and a 25-yard Taylor field goal attempt failed after it was tipped by Pelham’s Terrell Blevins.

Two plays later, Beall ran the ball into the end zone from 4 yards out to bring the game to 42-17.

Spain Park will host Oxford on Nov. 2 to finish the regular season before hosting a playoff game on Nov. 9.

By MICKEL PONTHIEUX / Sports Reporter The Briarwood Christian School volleyball team fell in the first round of the Class... read more