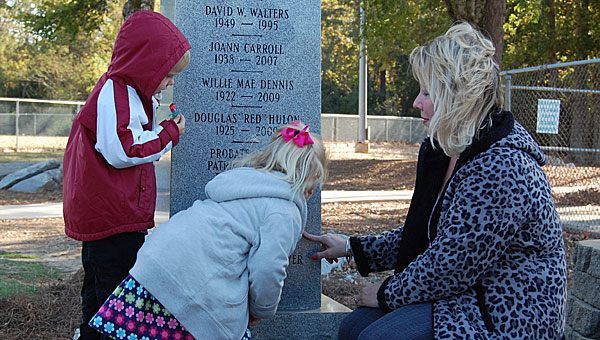 Several former Pelham elected officials, influential residents and a fallen police officer will forever be remembered at Pelham’s largest park after they were added to the park’s obelisk in late October.

The Pelham City Council recently voted to add former Pelham mayors Paul Yeager and Burk Dunaway Jr., Probate Judge Patricia Yeager Fuhrmeister, police officer Philip Davis and local restaurant owner Fran Driver to the memorial, which is near the walking path on the U.S. 31 side of the park.

About 30 Pelham officials, friends and family members gathered at the park on Oct. 28 to dedicate the memorial, which reads “In honor of those who have served in our community.”

“Today, we are paying tribute to those who have named Pelham a better place and made Pelham the city it is today,” said Pelham Mayor Don Murphy.

Yeager, the city’s first mayor, worked with others to help incorporate Pelham in the 1960s after Alabaster expressed interest in annexing the city, Murphy said.

“Pelham would have never become a city if it was not for this gentleman and his friends,” Murphy said of Yeager. “Our city has come a long way since then.”

“He loved the city of Pelham, and he led us through some tough times,” Murphy said.

Fuhrmeister, a Pelham native who served as Shelby County’s probate judge for many years, “dearly loved” the city, said her husband, Jim.

“She was the greatest person I have ever known,” said current Probate Judge Jim Fuhrmeister.

Davis worked with the Pelham Police Department for several years before he was shot and killed during a 2009 traffic stop on Interstate 65.

“He was a super-nice person, He loved his work, he loved the city and he loved his family,” Murphy said.

“We are so grateful,” said Davis’ widow, Paula. “We will never forget what Pelham has done for us.”

Driver owned Fran’s restaurant on U.S. 31, and “was one of the better citizens of this city,” Murphy said.

“If you had a problem, she did everything she could to help you,” said former Pelham Mayor Bobby Hayes. “Fran was one-of-a-kind.”