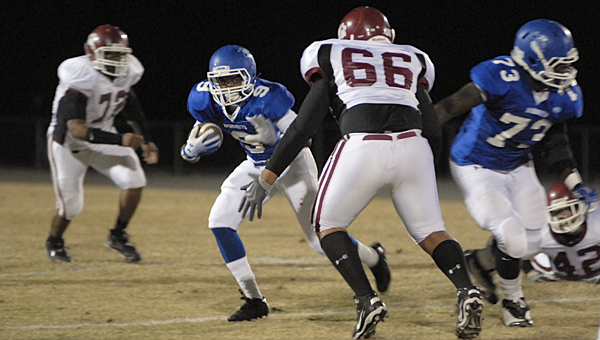 CHELSEA – The Chelsea Hornets ended the 2012 season with a 43-12 victory over the Shelby County Wildcats on Nov. 1.

“He has been a work-horse for us all year long,” said Waldrop on his senior running back. “He’s going to have a good career at UAB.”

Shelby County (1-9, 1-6 in Class 5A, Region 4) took the lead on their first drive of the game. Junior quarterback Ty Proctor connected with Andrew Schauer on a trick play for a 46-yard gain to set up a 1-yard Proctor touchdown run for a 6-0 advantage.

“We have worked on that all year long,” said Wildcats’ head coach Brent Smith on the big play. “They (Chelsea) are a pretty good football team and we knew that we would have to do something a little bit different to stay out in front of the game for a little while. I thought a couple of those trick plays let us hang around early in the game.”

Jacob Green put Chelsea on the board on the ensuing kickoff with an 85-yard return for a touchdown to even the score 6-6 just three minutes into the game.

Austin Washington broke free for an 83-yard touchdown run on the Hornets’ first offensive drive of the game for a 13-6 Chelsea advantage.

The Hornets never looked back once they took the lead. After a Wildcat fumble, Chelsea drove down to the Wildcats’ 23-yard line and Josh Carpenter converted on a 40-yard field goal for a 16-6 lead at the end of the first.

McCall scored his first touchdown of the night on Chelsea’s first possession of the second quarter. McCall rushed for 92 yards of the 96-yard drive including the seven yards for the score giving the Hornets’ a 23-6 lead.

Proctor connected with Schauer for another big gain, this time for 40 yards, on the Wildcats’ second scoring drive of the game. Proctor capitalized on the opportunity with a 1-yard touchdown run for a 23-12 score at the half.

Chelsea’s McCall scored his second touchdown of the game on the Hornets’ first drive of the second half. McCall carried the ball six times on the nine-play drive that ended with a 1-yard run for a 30-12 Chelsea lead.

Trenton Hagin added to the Hornets’ lead when he broke for a 24-yard touchdown run for a 37-12 score midway through the third quarter.

Hagin connected with senior Cooper Page for a 23-yard touchdown reception for the 43-12 final score.

Hagin finished the game with 4-of-7 passing for 83 yards and a touchdown.  Page led Chelsea receivers with two catches for 43 yards and a score.

Martarius McGregor led Shelby County with 115 yards on 17 carries. Proctor finished with 35 yards rushing with a touchdown and 182 yards passing.