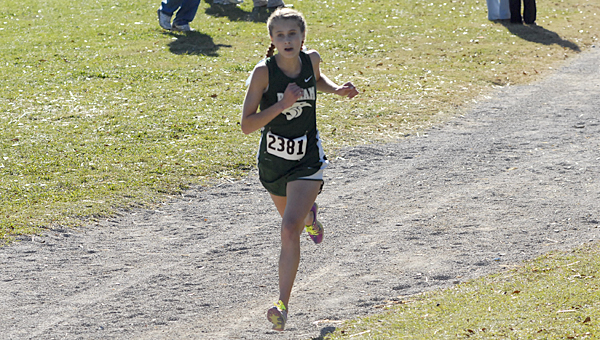 Strozier and Erin Landa both qualified for the state championship meet from Pelham while the team from Oak Mountain made the meet since the Lady Eagles finished third in the team standings.

Hoover and Vestavia Hills teams finished first and second respectively to move on to the Nov. 10 state meet.

Mark Ferrell led the Spain Park boys’ team to a third place finish to allow the Jaguars a chance to run in the Class 6A meet. Ferrell took third with a time of 17:08.48.

Jordan Strong rounded out Jaguar runners in the top-10 with a sixth place finish.

Thompson’s Tara Miller leaps for a block in the Lady Warriors’ 3-0 loss to Huntsville in the Class 6A quarterfinals... read more