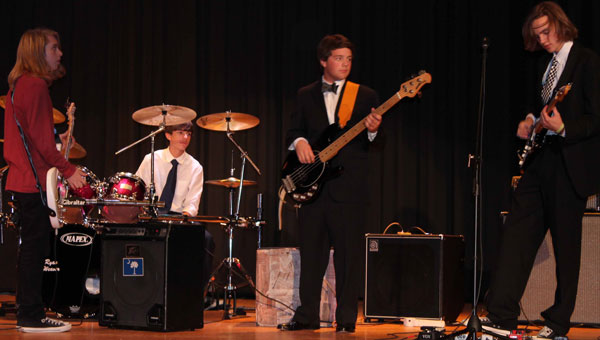 Pelham High School students showcase their talents during the school's first Rock the Hill show at the school. (Contributed)

“Let’s have a musical showcase,” said PHS Theatre teacher Jamie Stephenson, “a chance for kids with small bands to perform. Will lit mag co-host with theatre?”

Stephenson chose October. In August, we booked the date. What we didn’t have was a name for the event. Stephenson was tossing out ideas when PHS junior Cameron Lee said, “What about Rocking the Hill?”

“From the mouths of babes,” I said to Stephenson-and our event had a name.

The title morphed into Rock the Hill when the first sign was mistakenly written as Rock. Rock worked. Rock the Hill stuck-and our students started planning. One group of students made a commercial, a few made signs and a sign-up sheet was posted for bands willing to play.

When the dust settled, we had five committed groups who put in hours to prepare for the big night. We started ticket presales, talked up the event and hoped for a good turn out. Our bands came for final instructions and sound check.

“These kids have worked hard,” I said. “I hope they’re rewarded with a reasonable audience.”

“That first Write Night, weren’t there about 40 kids? Now there are 800-plus who turn out every February for Write Night,” Stephenson said. “Traditions start somewhere. Let’s see what happens.”

On the night of the first PHS Rock the Hill, talented, hard-working, excited musicians performed, stunning their classmates, teachers, family and friends with incredible music. Performers appreciated each other’s talents.

“James Byrd’s group was extremely solid and had the vibe of their songs down,” Jay Newton said.

In a jam session that ended the show with the musicians playing together on stage, these PHS performers rocked the hill-creating a new tradition and extending Pelham High School’s tradition of celebrating our students’ many talents.

Running to win the race against breast cancer

A few of the PHS Pink Panthers at the starting gate of the Susan G. Komen Race for the Cure:... read more