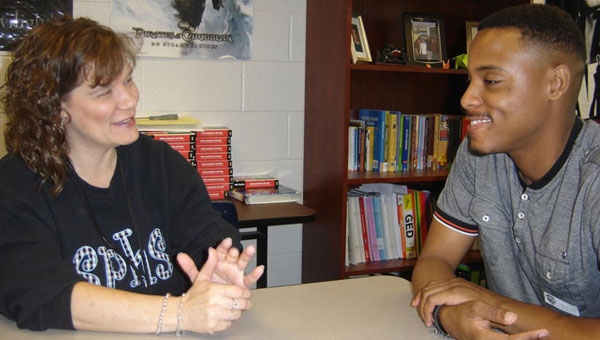 Despite wonderful facilities on a spacious campus with fine teachers and administration, some students still have a tough time meeting the standards as they go along and find themselves in questionable status as graduation day looms somewhere ahead.

Browsing the Spain Park website recently, I came across a link to “The Graduation Coach.” This was a new term to me, and I decided to investigate.

I met with Jennifer Stockstill, Spain Park grad coach, former English teacher, mother of two teenage sons and someone who is committed to the work she is doing.

Dr. Ken Jarnagin, principal, said, “This lady is doing a wonderful job and is having an impact on kids and their families, maybe even their family trees.”

In her second-floor classroom, which she calls “Grad Coach Island,” we talked about just what she is called to do. She has a group of 50-60 kids who were referred by counselors, teachers and parents. These students, whom she always refers to as “my kids,” typically benefit when a caring “coach” steps in with encouragement, study help and a vision for their success.

As we talked, Tradarius Clark, a 2012 graduate and one of her former “kids,” walked in. He told me that “Ms. Stockstill helped me get my head on right. She never gave up on me when I wanted to give up on myself. She gave me hope when I didn’t have any.”

“If you graduate, you will!” she responded.

He came to see his picture and to tell her that he was enlisting in the Air Force and hoped to further his education there.

The Graduation Coach was a pilot program at Spain Park and Hoover High Schools last year. Both schools elected to refund the position. There are currently 24 graduation coaches on a state-funded pilot program in Alabama.