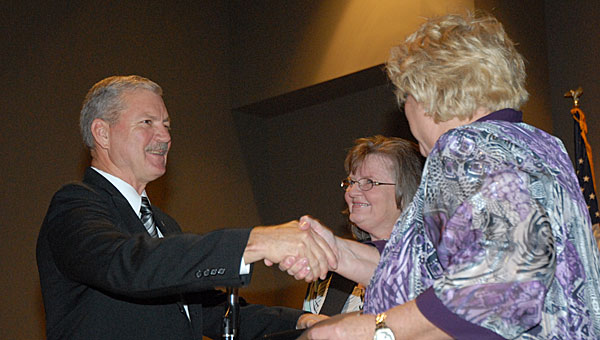 Pelham’s newly elected officials said during a Nov. 5 swearing-in ceremony they are looking forward to “working as a team” to better the city over the next four years.

“We are very excited. I am extremely proud to be a member of this team,” said Hayes, who is serving his first term on the council. “It’s important for us to remain a team. We are tasked for the next four years to work together.

“This group can not succeed by itself. We need your help,” Hayes added.

Waters said he often worked calls alone during his time with the Pelham Fire Department, but said working alone “is not necessary today.”

“What our city needs now, we need a unified effort,” Waters said.

Scott, who is serving his first full term after being appointed to fill a vacant council seat in 2011, said “there are good things coming our way.”

McMillan is serving her first term, and said she is looking forward to working with her colleagues “to keep the city moving in a positive direction.”

Mercer encouraged the more than 100 people in attendance to continue to come to City Council meetings over the next several years.

“Do not let this be the last council meeting you come to. We need your input,” Mercer said.

Rice began her eighth council term during the meeting, and also encouraged those in attendance to share their input with the council.

“I hope that all your hopes and dreams for Pelham come true,” Rice said. “We plan to work toward that end.”