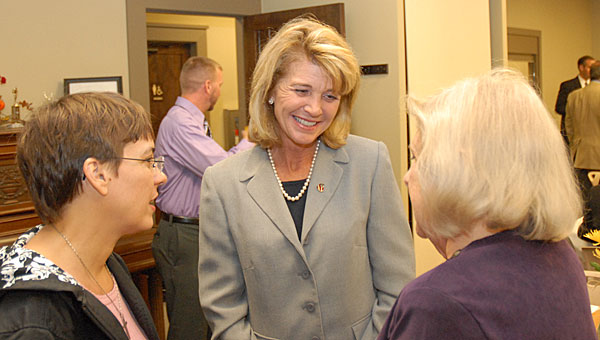 New Alabaster Mayor Marty Handlon and the new City Council members said they are ready to start working after they were sworn in during a Nov. 5 ceremony at the Alabaster City Hall Annex.

Following the swearing-in ceremony, the new elected officials joined dozens of friends, family members and city employees at a reception at the Alabaster Senior Center.

“It’s surreal. It’s finally here,” Handlon said at the reception. “Tonight went really well, and I would like to thank all of my supporters. They are the reason I’m here.”

Handlon said she plans to set up meetings with the department heads and city employees over the next several days, and is looking forward to working with the council members.

Bedsole, the only non-incumbent council member sworn in during the ceremony, said he was ready to take office and said he is “excited about the challenge.”

“There’s certainly going to be a little learning curve, but everything I have done has prepared me for the challenge,” Bedsole said.

Bedsole said he is planning to “be himself” during his time on the council.

“The decisions I make will be reflective of my values and beliefs. There will be some tough decisions, but you just have to stay true to who you are.”

Take time this week to thank our veterans

By JAN GRIFFEY / Editor World War I did not officially end until June 28, 1919. However, fighting ended on... read more