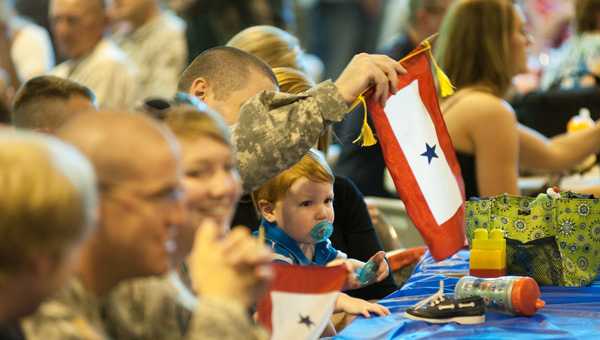 Pelham and state officials honored the Pelham-based Company B of the 1/167th Army National Guard Infantry Battalion in observance of Veterans Day. The company is currently deployed to Afghanistan. (File)

When Pelham Mayor Gary Waters looks at the list of soldiers serving with Company B of the 1/167th Infantry Battalion of the Alabama Army National Guard, the impact is personal.

Company B, along with the 1/167th Infantry Battalion, will be deployed to Afghanistan until about June 2013 in support of Operation Enduring Freedom.

“Our men and women bravely put themselves in harm’s way in order to promote, protect and preserve freedom. We are inspired by their dedication. We are encouraged by their bravery,” Alabama Gov. Robert Bentley wrote in a press release. “We are thankful for how they serve our country with dignity and honor.”

Waters, also an Army and National Guard veteran, started his military service as a rifle platoon leader with Company B, and eventually worked his way up to company commander before retiring from the National Guard. Waters attended Company B’s sendoff in June, and said he is anxiously awaiting the soldiers’ return.

“I wasn’t the one behind the microphone when they were sent off, but I will be the one to welcome them back,” Waters said.

Waters encouraged local residents to remember all service members – both past and present – in the wake of Veterans Day.

“Veterans Day is not just to remember those who died or those who fought in a war, it’s to honor everyone who has ever put on a uniform,” Waters said.

Bentley said the Alabama National Guard is the fifth-largest in the country, and has the highest per-capita membership in the nation compared to the number of residents in the state.

By AMY JONES / Associate Editor NORTH SHELBY — A local church is offering a chance for shoppers to pick... read more