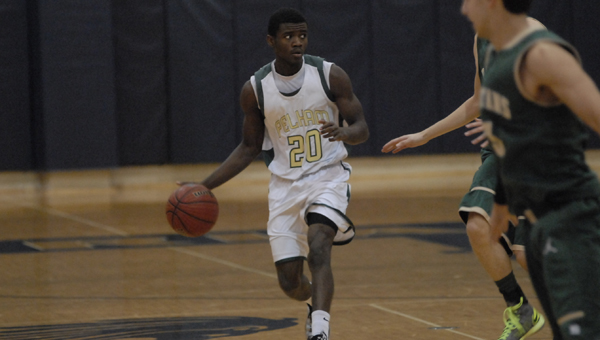 NORTH SHELBY – Pelham’s Justin Brooks put the Panthers within two points of Mountain Brook with under 30 seconds remaining in their North Shelby Tip-off tournament championship game, but was unable to pull ahead in a 69-66 Spartan win.

Justin Brooks hit a 3-pointer from the left wing with 27 seconds left to pull the Panthers within two, 67-66. Kenny Meadows had a chance to tie the game after Willie Simpson picked up a steal with seven seconds left. Meadows missed the first, but converted on the second to draw Pelham within one, 67-66.

Mountain Brook’s Patrick Keim converted on a pair of free throws to give the Spartans a 69-66 win.

Pelham struggled early and trailed 22-8 in the first quarter. The Panthers went on a 10-6 run to pull within nine, 31-22 with less than two minutes in the first half.

The Spartans took a 34-24 lead by hitting eight 3-pointers in the first half.

Brooks hit a three to start the fourth to cut the Spartan lead to three, but Mountain Brook answered with a 7-0 run to take a 61-51 edge.

Brooks led the Panthers on a 7-0 run to bring Pelham back within three, 61-58, with under five minutes remaining.

Both Brooks and Clark were named to the all-tournament team.

Berman was named the tournament MVP and Grant was selected to the all-tournament team.

Briarwood's Sam Cargo passes to an open teammate in the Lions' 60-39 victory over Holy Family Catholic in the North... read more