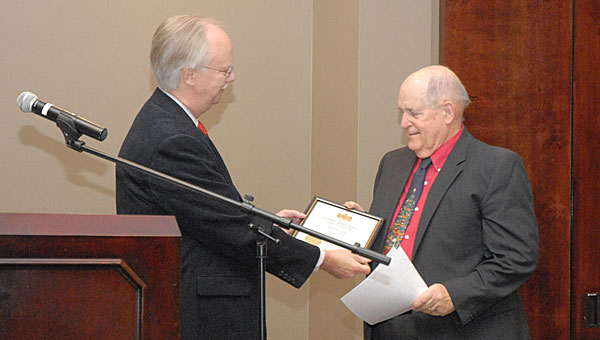 The Retired Senior Volunteer Program honored hundreds of senior citizens for donating thousands of hours of their time to help others in Shelby County during a Nov. 29 luncheon at the Pelham Civic Complex.

During the lunch, RSVP officials handed out awards to senior citizens from all over Shelby County for serving anywhere from five to 30 years with the RSVP program.

Through the RSVP program, adults 65 and older volunteer their time to help programs ranging from delivering hot meals to homebound adults to helping school children with reading skills. The Shelby County RSVP has more than 1,100 volunteers who have donated more than 1.6 million hours of service over the past 12 years.

“The whole foundation of our country was grounded and founded on volunteer service,” Pelham Mayor Gary Waters said.

“I am so grateful for all of the hours of service you’ve dedicated to Shelby County,” said Penny Kakoliris, executive director of Positive Maturity, RSVP’s sponsoring agency.

This year marked the first time the volunteer award lunch was held at the Pelham Civic Complex after it was held at the Rolling Hills Conference Center in Calera for the past several years.

During the event, Shelby County RSVP Director Marvin Copes presented 60 pins for various years of service, 14 Presidential Volunteer Service Awards recognizing 4,000 hours or more of service, 104 Gold Volunteer Service Awards for serving between 500 and 3,999 hours, four Shelby County Volunteer Spirit Awards for service to the community, 13 awards to organizations for donating 5,000 or more hours of service and seven awards to organizations for serving 10,000 hours or more.

“This is a great honor. I’ve got a tear in my eye,” Copes said after receiving the award. “Thank you, judge. I do appreciate it.”

By CHRISTINE BOATWRIGHT / Staff Writer Gov. Robert Bentley has awarded a grant to the county to help combat the... read more