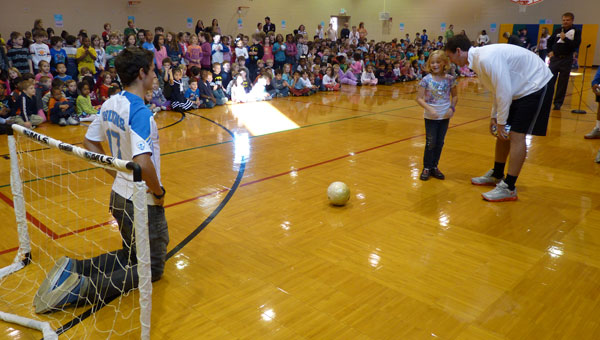 Chandler Hoffman waits for a Riverchase Elementary student to take a shot on the goal. (Reporter photo/Amy Jones)

RIVERCHASE — When Chandler Hoffman was growing up, his love of soccer was a little unusual.

All the other kids talked football, all the time.

So when the Oak Mountain High school graduate and current Major League Soccer player got the chance to return to the area to help grow his sport, he took it without thinking.

“I love seeing soccer growing in the Birmingham area,” he said.

Hoffman and players from the University of Maryland and Creighton University soccer teams, who will play in the NCAA Men’s College Cup soccer championship this weekend at Hoover’s Regions Park, visited Riverchase Elementary School Dec. 6 to get the kids excited about the original sport of football.

“From when I was this age, all year all people talked about was football,” Hoffman said, gesturing to the crowd of kids. “Having an event like this for kids and them getting to see (soccer) on ESPN, I think just elevates soccer more.”

During the event, Gene Hallman, executive director of the Alabama Sports Foundation, spoke about how academics and athletics go hand in hand.

“These players all have one thing in common,” said Hallman, pointing to Hoffman and the other soccer players. “These are all very difficult and great universities. If you don’t have the grades, no matter how good you are at your sport, you will not get in.”

After Hallman spoke, Hoffman set up a small soccer goal and children from the crowd were selected to try to score goals against him. Hoffman, defending the goal on his knees, missed more shots than he defended — to the crowd’s delight.

Hoffman, who just finished his first year as a professional with the Philadelphia Union, said he’s still adjusting to the pro game. This year, Hoffman played in seven games for the Union, starting two.

“It’s been tough. You go from being the star to being at the bottom again. But it’s been really enjoyable getting to do what I love for a living,” he said. “I’ve just got to keep working harder and hopefully be on the field more next season.”

For more information, including to purchase tickets, check Collegecupsoccer.com.