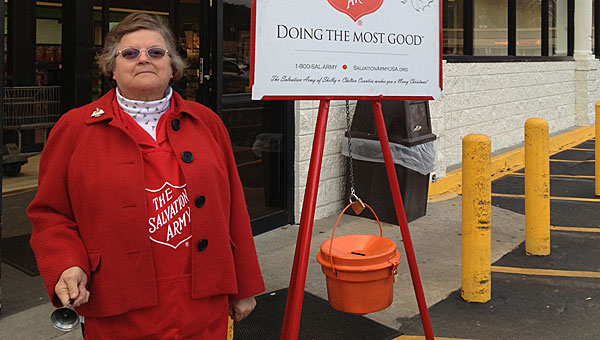 Mary Thomason mans a Salvation Army kettle location at the Belle Foods in Alabaster on Dec. 12. The Salvation Army is asking for the public's help to reach its holiday fundraising goal. (Contributed)

The Alabaster-based Salvation Army of Shelby County is looking for the public’s help to prevent the organization from falling short during its Christmas kettle campaign.

Salvation Army Corps Officer Lt. Jamie Leonard said the Salvation Army is looking to raise at least $165,000 through the campaign, and was about $90,000 short as of Dec. 12.

“We really need some help. It’s been a very hard season,” Leonard said, noting the annual kettle campaign is one of the Salvation Army’s major fundraisers, and helps to support programs designed to help those in need in Shelby County.

“Every penny we are short, that impacts the services we provide,” Leonard added.

Through its kettle campaign, Salvation Army members and volunteers set up red donation kettles and ring bells at many locations during the Christmas season. The Shelby County Salvation Army operates kettles at 25 locations, including Walmarts and Belle Foods locations.

Leonard also said the organization is in need of volunteers to man the kettles, which will operate until the afternoon of Christmas Eve.

Montevallo Elementary closed until after holidays