Chelsea advances with win over Montevallo 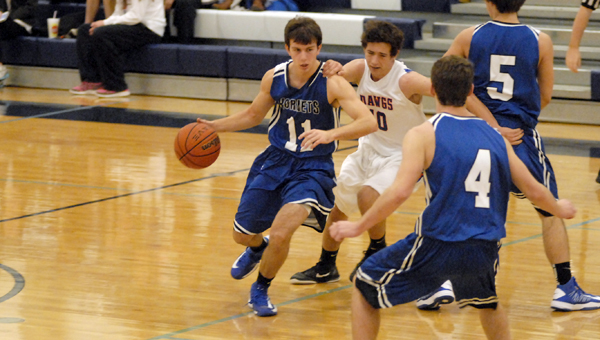 Chelsea's David Simpson looks to drive to the basket past Montevallo's Landon Goodwin in the Hornets' 74-60 win over the Bulldogs at the Shelby County tournament at Calera High School Dec. 15. (Reporter photo/Mickel Ponthieux)

CALERA – The Chelsea Hornets rallied from a first-quarter deficit to claim a lead at the half on their way to a 74-60 win over the Montevallo Bulldogs in the first round of the Shelby County tournament at Calera High School Dec. 15.

The Bulldogs went on a 9-0 run in the first quarter to claim a 24-16 lead headed into the second.

Chelsea responded with a run of their own scoring 11 unanswered points to tie the game 29-29 with over two minutes left in the half. Malik Abrams gave the Hornets a two-point lead and Austin Washington added a basket at the buzzer for a 35-33 Chelsea lead at the half.

The Hornets pulled away in the third quarter with a 9-0 run to take a 50-46 lead into the final eight minutes.

Chelsea held Montevallo to 14 points in the fourth quarter while converting on 10-for-13 from the free throw line to seal the win.

Chelsea will face Thompson Dec. 15 at 4:30 at Oak Mountain High School in the second round of the tournament. Montevallo will face Westminster at 3 p.m. Dec. 20 at a location to be determined.

Briarwood's Hannah Wainwright shoots for two of her 16 points in the Lions 45-30 victory over Chelsea Dec. 14. (Reporter... read more