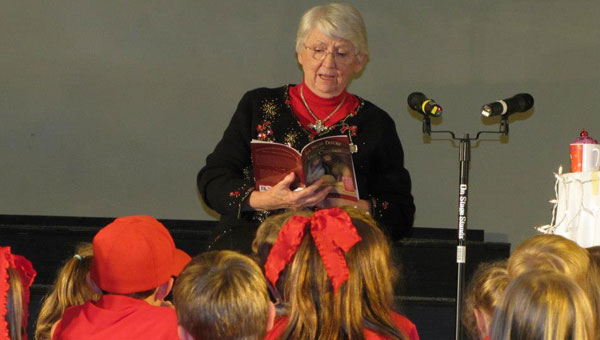 Mary Bishop reading “The Night Before the First Christmas” to the children at Calera Baptist Church. (Contributed)

Christian churches throughout Calera and, indeed, the world, are preparing to celebrate the birth of Jesus Christ.

For the Christian world, Christmas is a celebration of the gift of grace. The gift is Jesus Christ, the son of God, whose birthday is recognized on Dec. 25. Christians celebrate because they believe without God’s gift, there is no forgiveness of sin.

Sin is rooted in self. I want and I will do whatever it takes to get it. The world is populated with sinful people. According to God, everyone is a sinner. Every human born to date has lived a sinful life. God hates sin and because he is holy and righteous, sin separates us from him.

The Bible states sin became rampant shortly after God created the earth and placed man on it. God flooded the earth, saving eight righteous people to repopulate it. Though they were good people, they had the inherent nature of sin and God was back to square one in no time. Through Abraham, God instituted the sacrifice of animals to cover sin. This was a typing of God slaughtering an animal to cover Adam and Eve’s nakedness. God sent prophets and judges to speak up for him, but most of them were imprisoned or killed.

If I were God, my patience would have been worn thin. I would have wiped out the human race and made a fresh start. But God’s not like that. He loves the world, even if his love is not returned. Because he created us, he stepped up to the plate and destroyed the power and penalty of sin.

God placed his seed in a virgin to bring forth his only Son to be a sacrifice for the sins of the world. When the blood of Jesus flowed from his side as he hung on a cross, the sacrifice of animals was abolished. His sinless body and blood made an offering that satisfied God once and for all.

Christians have placed their faith in Jesus Christ for forgiveness of past, present and future sins. They celebrate Jesus’ birth and exchange gifts because wise men presented gifts to the Christ-child.