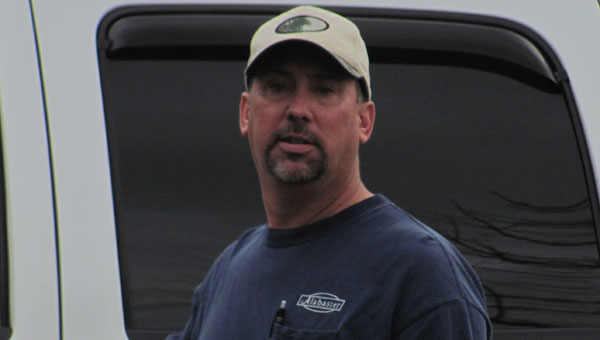 Bruce Holcombe grew up in the Camp Branch community, and is now a city of Alabaster employee. (Contributed)

At one time, the community of Camp Branch was a thriving, active area with a school, softball, baseball, volleyball, social gatherings, singings and lots of gospel and country music.

Bruce Holcombe, now an Alabaster Public Works employee, grew up playing ball there and listening to his dad, Roy, call the square dances. He went to sleep many nights listening to the drummer, never dreaming one day he would hold that job.

By his teenage years, Holcombe was playing gigs with organized bands.

Roy and his wife, Nell, have passed away, but their sons Roy Jr. (Peewee) and Bruce still live on the original 10 acres that have been Holcombe land for many years.

Raised in a close family atmosphere by people known far and wide for their generosity, it is no wonder that Holcombe was a little reluctant to do this article.

He knows he was blessed with great parents, has an older brother for his best friend and a very special wife he met at a volleyball game in Camp Branch. It took Holcombe six years to pop the question, but he quickly admits it was the best decision he ever made.

Holcombe and Vicki are parents to Brett, a junior at Thompson High School where he plays the drums like dad, and Brad, a seventh-grader who plays trumpet and loves basketball.

“I used to carry my own drums everywhere but now I’m a THS band parent and I cart instruments,” Holcombe said.

Both Holcombe and his brother work for the city of Alabaster. Debris removal, ditch drainage, replacing and adjusting signs and most recently hanging dozens and dozens of Christmas lights are just a few of the jobs that take up his work day.

Holcombe was ahead of his peers in social maturity, because at the age of 14 he was already working with the family in the roofing business and playing regularly in bands.

“Shelby County and Alabaster have been good to me and I am perfectly content,” Holcombe said.

Sandra Thames can be reached by e–mail at bobthames1942@yahoo.com