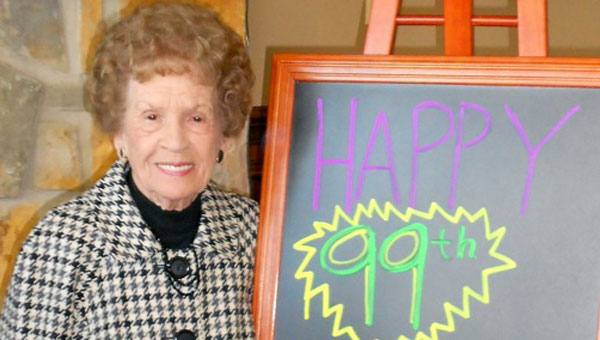 “What are ya’ll doing here?” Lola Todd asked when she walked in Timberline Country Club’s dining room. Todd, a.k.a. Miss Lola, was surrounded by friends and family Nov. 11 to celebrate her 99th birthday.

Lola Pearce Gullage was born Nov. 14, 1913, to Edgar and Vela Gullage of Pinckard. Her family later moved to Midland City, where Ed was a blacksmith and carried mail to the train. Vela kept the home fires burning. She lived through the heart of the great depression, but doesn’t remember much about it because “there was always food on the table even though sometimes just beans and cornbread.” She attended Dale County High School in Midland City, then worked as a telephone operator.

Miss Lola married Aubrey Todd of Dothan in 1938. Aubrey attended the Baptist Bible Institute in 1960 and pastored churches in northwest Florida and central Alabama for 30 years. Miss Lola was the consummate pastor’s wife. When Aubrey lost his battle with cancer in 1990, the Todd’s 52-year courtship marriage ended.

Miss Lola and Aubrey have one son, Jim, who is married to Susan, two granddaughters, Michele Bankston (Chip) of Montgomery and Shannon Hobbs (Brent) of Wilsonville. The Bankstons have one son, Forrest. The Hobbs are parents to a son, Hall, and daughter Sawyer.

Miss Lola moved to Calera in 1998 to be near Jim and Susan. She joined Concord Baptist Church where she still attends today. She can always tell you who is there, who isn’t and why. Rest assured if you miss Sunday School, Miss Lola will be calling to check on you.

At the age of 99, Miss Lola is amazing. She lives by herself and takes care of most of her own needs. She loves to shop, eat out and never passes up the chance to coo over a baby. Anyone in conversation with her is asked, “Where do you go to church?”

She shows no signs of slowing down and we look forward to Miss Lola checking on us for years to come. The Todds extend a special thanks to her friends and Sunday school class for a wonderful surprise birthday party.

Mary Bishop reading “The Night Before the First Christmas” to the children at Calera Baptist Church. (Contributed) By MOLLIE BROWN... read more