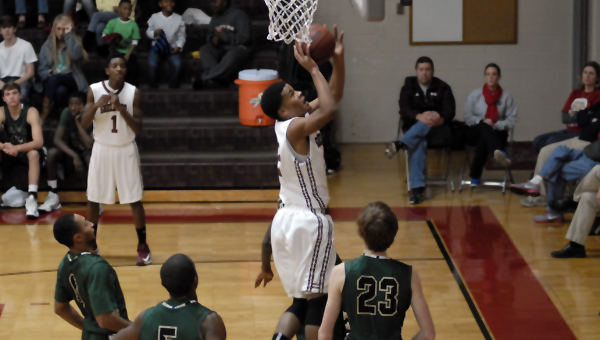 Shelby County's Emmanuel Hall scored two of his 12 points in the Wildcats' 72-68 win over Pelham in the semifinals of the Shelby County tournament at Shelby County High School Dec. 21. (Reporter photo/Mickel Ponthieux)

COLUMBIANA – Shelby County’s Tyler Madison scored 19 points in the fourth quarter to lead the Wildcats past the Pelham Panthers 72-68 in the semifinals of the Shelby County tournament Dec. 21 at Shelby County High School.

Both teams battled for control of the tournament semifinal, as there were a total of six ties and seven lead changes in the game.

Shelby County took a 29-25 lead after the first half of play, but the Panthers went on a 7-3 run to even the game 32-32 two minutes into the third quarter.

Pelham extended their lead to six, 40-34, before Madison began to close the gap. The Shelby County senior scored five unanswered points and Justus Martin followed with a 3-pointer to for a 43-42 Pelham lead.

Madison gave the Wildcats a 45-43 by converting on a three-point play, but Justin Brooks hit a shot from beyond half-court to give the Panthers a 46-45 edge headed into the fourth quarter.

Brooks added a shot from beyond the arch in the fourth to give Pelham a 54-49 lead with over five minutes remaining.

Madison guided Shelby County back into the game by hitting a pair of free throws, and then converted on a three-point play to tie the game 54-54 with 4:37 left.

Kenny Meadows regained the lead for Pelham, 56-54, but Madison answered back with a three and a field goal to give the Wildcats a 59-56 lead.

Shelby County would hold on to the advantage for the rest of the game. Pelham pulled within four in the final minute, but the Wildcats went 6-for-7 from the free throw line to seal the win.

Shelby County will face Thompson, the No. 1 seed in the tournament, in the boys’ championship game Dec. 22 at the University of Montevallo at 6 p.m.

Thompson's DeAndre Gamble shoots for two of his eight points in the Warriors' 52-29 semifinal win over Oak Mountain at... read more