Pelham runs away in third quarter 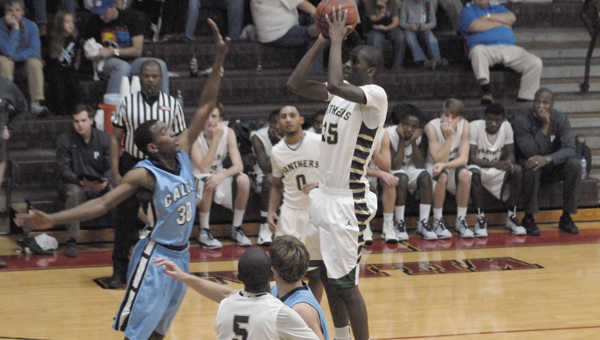 Pelham's Dakota Clark shoots for two of his team-high 17 points in the Panthers' 66-46 victory over Calera in the Shelby County tournament at Shelby County High School Dec. 20. (Reporter photo/Mickel Ponthieux)

COLUMBIANA – The Pelham Panthers trailed by one at the half, but came out on fire in the third quarter to claim a 66-46 win over the Calera Eagles in the second round of the Shelby County tournament Dec. 20.

Pelham tied the score twice in the second, but Ronnie Clark gave Calera a 25-24 lead on a put-back basket.

Clark led the Eagles with 17 points and Jordan Bishop finished with 10 points.

The Panthers will face Shelby County in the semifinals while the Eagles will play Briarwood in a consolation game.

Shelby County's Kalen Starks led the Lady Wildcats with 25 points in their 66-51 win over Briarwood Dec. 20 at... read more