Walking on water requires getting out of the boat 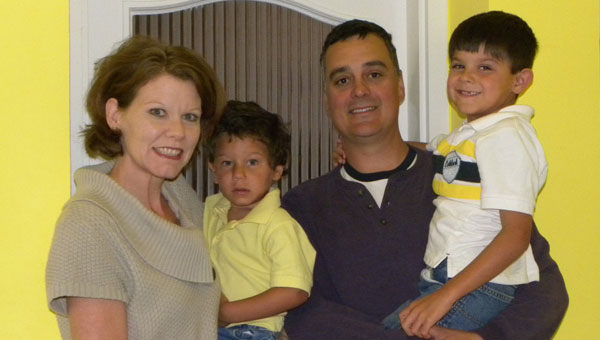 Darlena and Paul Hnizdil, with sons Georgie and Patrick in their Hungarian apartment, where they lived for a required 30-day period, bonding as a family. Little George Edward Hnizdil became a legal member of the family on June 11, and an American citizen when their plane touched down in the U.S. on June 17. (Contributed)

He was just turning 4 years old.

The woman who had loved and cared for him since his infancy, and the woman taking him away, looked at each other in tears. How would he react when leaving the little Hungarian village, the only home he had ever known?

“Would you like to say ‘goodbye’ one last time?” his new mother asked him.

Smiling broadly, he called out “Chow Baby!” and everyone laughed as the van door closed and drove away.

Darlena, husband Paul, and 8-year-old Pat spent 45 days in Hungary, bonding with Georgie as a family. They introduced him to friends and family via FaceTime and Skype and used photos to familiarize him with their home, yard, neighbors, dogs, streets, etc.

“He called us Anya and Apu (momma and daddy) right away,” Darlena said.

After visiting in his village a few days, the four moved into an apartment for a required 30-day period, then stayed in Budapest while adoption papers were finalized by the Hungarian government and U.S. Embassy.

Traveling and arriving at home in Chelsea, Georgie was happy and excited about everything, she said. And his happiness and excitement hasn’t waned during the seven months since.

She said when they started adoption paperwork nine years ago, after three years of infertility treatment, someone gave them the book “If You Want To Walk On Water, You Have To Get Out Of The Boat,” by John Ortberg. And this has become their family motto.

Darlena and Paul adopted Patrick domestically as a newborn. But after two years of trying unsuccessfully to adopt domestically again, they turned to international adoption. Two years later, they were matched with Georgie.

God has “supernaturally knit our hearts and souls together with the children He created for us,” Darlena said.

Paul said the process and the experience “affirms once again the sovereignty of God.

“He knows what is best and will provide for the faithful. Just stay faithful and persevere. If you want to walk on water, you have to get out of the boat.”