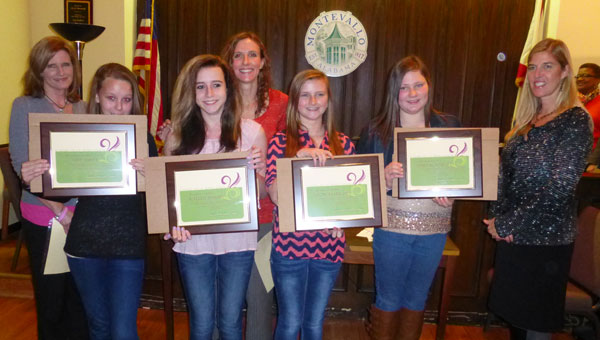 Emily Kornegay, Abby Smith, Kaelyn Martin and Georgia Hughes raised more than $1,100 after their language arts teacher, Betsy Moore, began a class project in conjunction with the book “After Ever After” by Jordan Sonnenblick.

“We read the book, which is about a boy who is in remission from cancer and his best friend who also had it,” Moore wrote in an email.

Moore then instructed her students to create a “persuasive advertisement” to convince people to donate to St. Jude Children’s Hospital. The class then held a schoolwide fundraiser.

The students, while developing the advertisement, saw a photo of a girl they wished to sponsor. The four girls held fundraisers in school and in their free time for the girl. They were also able to contact the girl and her parents.

Moore contacted Sonnenblick, the book’s author, to “let him know how his book has impacted our school for the past couple of years” and to share what her students did as a result. Sonnenblick sent a video “thanking them for their efforts,” Moore wrote.

During the City Council meeting, Montevallo Mayor Hollie Cost said the students are “young ladies who are trying to make the world a better place by what they’re doing.”

“They made a sincere effort to raise money, and it truly made a special impact,” Cost said.

The City Council presented the four students, along with Moore and Tina Hughes, mother of Georgia Hughes, with plaques of recognition from the city.

By NEAL WAGNER / City Editor Pelham Police said they have taken a suspect into custody in connection with the Jan.... read more