Above the Influence takes hold in schools 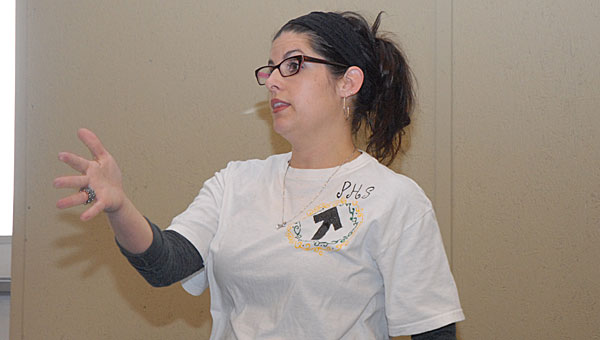 Windy Rosenstiel, a volunteer who helpd to bring the Above the Influence program to Pelham High School and Riverchase Middle School, speaks to the Shelby County Drug Free Coalition during a Jan. 17 meeting. (Reporter Photo/Neal Wagner)

SAGINAW ­­– Over the past seven years, groups of students at Pelham High School and Riverchase Middle School have been leading the charge to make their classmates – and even their parents and neighbors – more aware of the negative consequences of drug and alcohol abuse.

During a Jan. 17 meeting of the Shelby County Drug Free Coalition at Family Connection in Saginaw, Windy Rosenstiel shared the impact the Above the Influence program has had at the two schools.

Rosenstiel worked to bring the Above the Influence program to PHS seven years ago, and now meets with about 50 students during the program’s weekly get-togethers in the PHS auditorium.

After losing her father to drug abuse, and witnessing other family members struggle with illegal controlled substances, Rosenstiel said she worked to bring the program to the schools in an effort to make students more aware of the dangers of drug and alcohol use.

“(The students) react really well when a live person comes and tells their story,” Rosenstiel said.

Through the program, which is largely student-led, the kids are exposed to real-world consequences of experimenting with drugs. Over the years, the students have created artwork and signs displaying Above the Influence’s trademark upward-pointing arrow, and have worked to produce plays and dramas to present to their peers.

“This program does not leave the user out. I tell them ‘If you’re going to put something in your body, at least educate yourself about what it is you’re putting in your body,’” Rosenstiel said.

Chris George, the commander of the Shelby County Sheriff’s Office’s Criminal Investigations Division, said the program is effective because it connects students with their peers.

“It’s not cops or McGruff the crime dog up there lecturing them about drugs,” George said. “They are comfortable talking about this in their peer groups.”

Juvenile Judge Jim Kramer, the chairman of the Drug Free Coalition, encouraged the many Shelby County school administrators, counselors and teachers at the meeting to work with volunteers to help bring the Above the Influence program to every middle and high school in the county.