Rayam reaches out to community 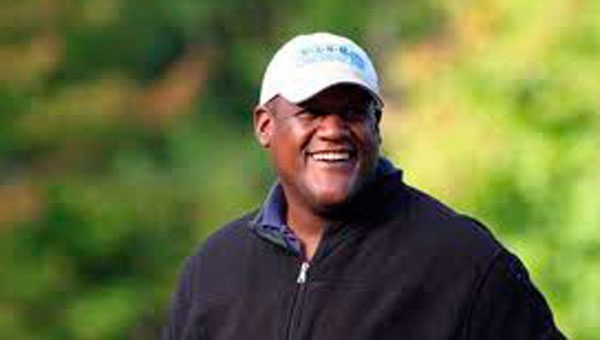 In the last seconds of the fourth quarter Penn State attempted a field goal to win the game. Rayam was to open the hole for Mike Ramil to go for the block. Rayam went up, hands in the air and blocked the kick. History made, Alabama 17 – Penn State 16, and another win for Alabama.

Rayam and his family live in Alabaster where he is very involved with volunteer coaching, Kingwood Church and is the founder and president of Team Rayam Outreach.

Blessed to travel as a spokesman for the NFL Play60 Program, Rayam speaks to youth groups, schools and civic and community organizations across the state.

Rayam, a 1986 graduate of Orlando Jones High School, was originally recruited by Joe Kines who at the time was Alabama’s defensive coordinator. He received a “full ride” scholarship.

As the youngest of six children, Rayam lived in the city, but was raised with country values by his parents Curtis and Minnie Rayam.

Elaine Smith, 1989 Thompson High School graduate, literally bumped into Rayam while walking on campus. They married in June 1994. Rayam is the father of four children. He and Elaine are in the ministry not only of Rayam Outreach, but also the day-to-day job of being disciples of Christ and active, informed parents.

After playing for the Tide came stints with the NFL’s Washington Redskins and the Canadian Football League.

“The most favorite place we lived was Vancouver, British Columbia. It rains a lot, but the city is beautiful. Someday perhaps we can show our kids where they were born,” Rayam said.

Rayam claims to be a homebody, and is happiest supporting his kids in everything they do. Yard work, refinishing furniture, fishing, working with youth and football make him a happy man.

His goal is to travel a bit with his wife and enjoy children and grandchildren (someday).

MVES an answered prayer for Davenport

Meadow View Elementary School registrar Teresa Davenport has been working at the school for more than 12 years. (Contributed) By... read more