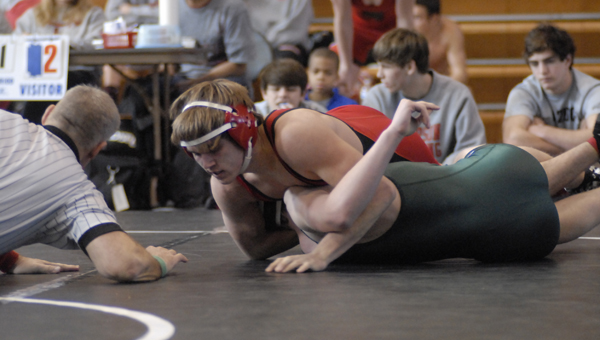 ALABASTER – The Thompson Warriors swept through the competition to win the Shelby County Scuffle Jan. 21 at Thompson High School.

Pelham’s Emilio Elliott and Chris Shiflett each won by decision for the Panthers.

Thompson followed with a 59-21 victory over Chelsea. Clay Anthony, Tyler Lacey, Brandon Belser, Austin Wilhite, Garrett Allen, Shane Evans and Jacobi Dial each won by pins for the Warriors. Chelsea was led by a pin wins by Derek Wood and Daniel Fraunfelder.

The Warriors ended the tournament with a 48-20 win over Oak Mountain. Haynes, Gilliland, Holder, and Gould each had pins for victories against the Eagles.

The Panthers fell to Oak Mountain in their second match 61-6 before defeating Chelsea 48-21 in the final dual of the day.