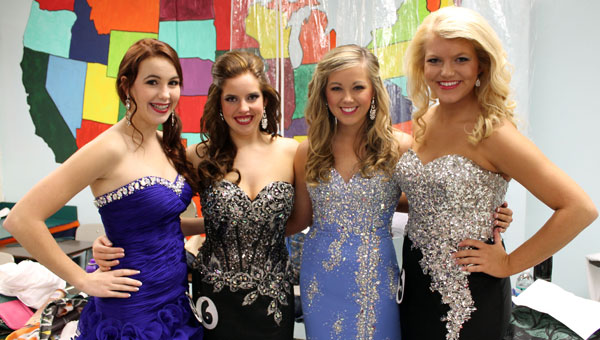 “What about the interview? Wasn’t that an incredible experience?” I asked Junior Sarah Briley who competed in the Miss PHS pageant.

“Actually, it was a painful experience,” Briley said. “I was so focused on shaking the judges’ hands and maintaining eye contact that I ran right into their table. Next time I have an interview, I will stop before I tackle the table.”

Briley is a talented performer with a great sense of humor. Watching her in the pageant was a delight because she was obviously enjoying herself.

Every year, Miss PHS offers participants an opportunity to present themselves in an entirely new light. Many candidates have competed in pageants for years, and look forward to Miss PHS as a chance to allow their classmates to see them in their element. However, our school pageant is open to everyone—and the fact that so many students are involved in Miss PHS adds to the fun.

Fifty-one girls and nine escorts participated this year. Every girl has an interview with the judges on the morning of the pageant. Knowing that the top 10 will answer on-stage questions, candidates realize that they may be volunteering for a public speaking stint when they decide to participate.

“Miss PHS was my first pageant. Everyone was dedicated, worked hard, and truly wanted to see their fellow contestants do their best!” Lydia Cobb said. “I can’t wait for next year so I can do the whole thing over again!”

Company has it in the bag