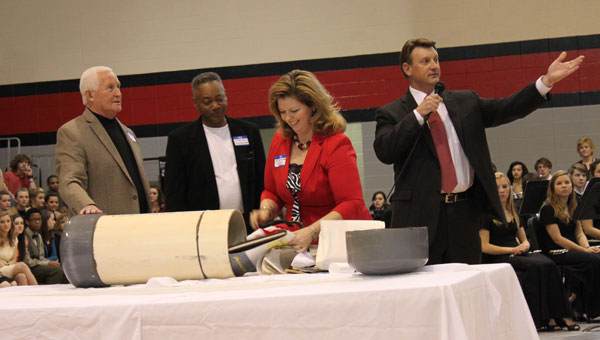 ALABASTER – Twenty-five years ago, Thompson High students filled a time capsule to be opened in 2013. On Jan. 25, members of the THS class of 1988 wheeled in the time capsule and opened it in front of a packed gymnasium.

Brian Lee, 1988 THS student government president, called the capsule a “snapshot in time” that was filled with everything from carbon copy paper, test papers and a list of teachers to a basketball net and photographs of the basketball team in 1988.

The time capsule was sealed behind a cinderblock wall in the school’s lobby in 1988.

Former THS Principal Larry Simmons, who was principal from 1986-1992, said the school had less than 1,000 students when he was principal, as compared to the 1,800 students today. 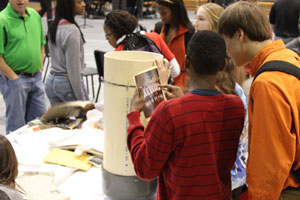 Students look through the contents of the 1988 time capsule, including a photograph of the basketball team. (Reporter photo/Christine Boatwright)

Mayor Marty Handlon said the city’s new school system is due to past leadership.

“I want to thank the people who had the foundation and stepped out in a new direction on a whole other level. It’s a great day to be a Thompson Warrior, and I consider myself one of them,” Handlon said.

Principal Dr. Danny Steele asked the students about the legacy they’ll leave behind.

“What you saw on the (time capsule) table was a lot of stuff. It’s possible the class of ’88 doesn’t even remember what they put in there,” Steele said. “Twenty-five years from now, what is your legacy going to be?”

THS chemistry teacher Michelle Holbrooks, who served on the Time Capsule Committee, said students can bring in contributions to the 2013 time capsule, which will be opened in 2038, until May.

The Time Capsule Committee will allow students to place items in the capsule for a fee. All money raised through the project will be used to install a new brick sign at the intersection of Thompson Road and Warrior Drive.

Jonathan Peeples, the 2013 SGA president, said he plans to put a football signed by the 2013 seniors into the time capsule.

“I want to talk about what it means to be a Thompson Warrior,” Peeples said. “It means you always leave a legacy of greatness wherever you go.”