Pelham gearing up for Opportunity League 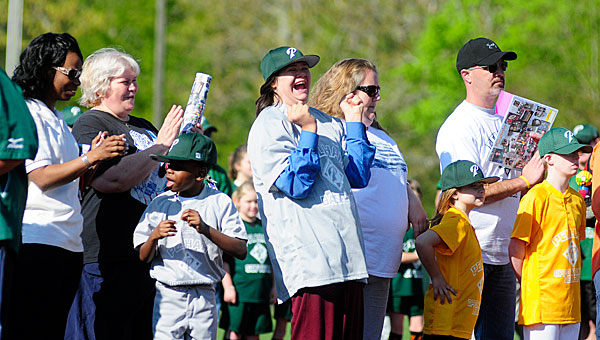 Pelham Opportunity League players celebrate after taking the field during the 2011 season. Pelham currently is gearing up for the 2013 season. (File)

The Pelham Parks and Recreation Department is seeking athletes and volunteers to participate in the 2013 Opportunity League for special-needs children.

The Opportunity League, which began in 2010 as the result of a partnership between Pelham and Easter Seals, is a baseball league for special-needs children. The league now is run entirely by the Pelham Parks and Recreation Department, said Parks and Rec Director Billy Crandall.

“We will start practicing in March, and we will have opening day on Saturday,” Crandall said. “We will probably keep registration open through the second week in February to give more kids a chance to sign up.”

During the Opportunity League season, players are paired up with volunteer “buddies” who assist the players with fielding, batting and running. All games are played at Pelham’s Fungo Holler Park near the Pelham Racquet Club.

“It’s a fun thing,” Crandall said. “And we are always looking for volunteers. Folks can stop by the park office (at Pelham City Park), and pick up a volunteer form.”

To learn more about becoming involved in the Opportunity League, call the Parks and Rec office at 620-6426.