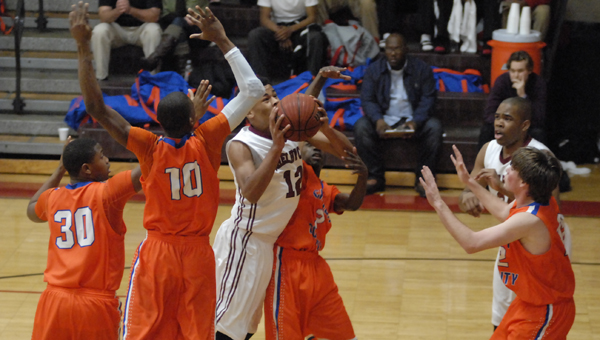 Shelby County's Emmanuel Hall battles his way to the basket in the Wildcats' 80-38 victory over Chilton County in the Class 5A, Area 8 tournament Feb. 8 at Shelby County High School. (Reporter photo/Mickel Ponthieux)

COLUMBIANA – The Shelby County Wildcats wasted no time solidifying their spot in the Class 5A, Area 8 championship finals in an 80-38 victory over the Chilton County Tigers Feb. 8 at Shelby County High School.

“I thought we came out and played with a lot of energy,” said Wildcats’ head coach Torry Brown. “We got a few (baskets) in transition. Defensively, we were quite solid in our half-court man-to-man. All in all it was a good night for us.”

Shelby County’s duo of Tyler Madison and Brandon McKinney led the Wildcats on an 8-0 run to start the game. After a free throw by Chilton’s Raquaez Cora, Shelby County went on a 12-1 run to extend their lead to 22-5 heading into the second quarter.

McKinney scored half of his game-high 20 points in the first quarter.

The Wildcats really began to pull away in the second when they went on a 14-0 run in the first three minutes to take a 36-5 lead.

After leading 42-12 at the half, Shelby County opened the second half with a 14-2 run in a span of more than three minutes to take a 56-17 advantage midway through the third. The Wildcats closed the third on a 7-0 run to capture a 63-21 lead in the fourth.

Brown rested his starters in the fourth and the Wildcats’ Michael Kenny led Shelby County to a 19-point fourth quarter to lock up the 80-38 win. Kenny scored all eight of his points in the final quarter.

Brown said that giving his bench players were able to match the energy his starters brought in the first three quarters.

“We were fortunate enough to make a few shots and get a big lead,” Brown said. “We had a chance to get a few young guys in there and they kept up the intensity on defense and make shots.”

In addition to his 20 points, McKinney added a team-high 20 rebounds. Madison finished with 19 points while Josh Pennington added 10 points, including a pair of 3-pointers in the fourth. Emmanuel Hall and Kenny each scored eight points for Shelby County.

Shelby County advances to take on Talladega in the Area 8 championship game on Feb. 11 at 7 p.m. The victory also clinches the Wildcats a spot in the sub-regional tournament.

FROM STAFF REPORTS Shelby County’s Jasmyn Buie came through for the Lady Wildcats in the last second to give them... read more