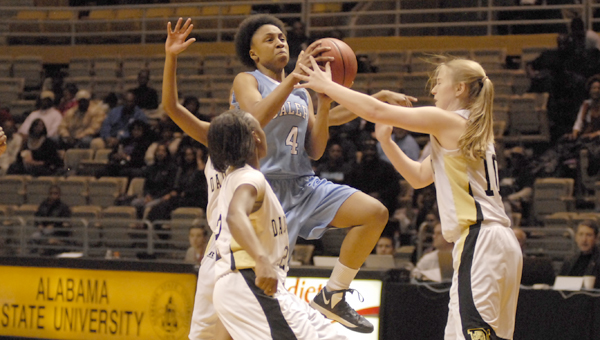 MONTGOMERY – The Calera Lady Eagles had multiple chances to catch the Dadeville Tigers last in the fourth quarter, but the shots didn’t fall as the Lady Eagles suffered a heartbreaking 46-40 loss in their Class 4A Central Region semifinal game Feb. 20 at Alabama State University.

“We didn’t execute,” said Calera head coach James Knowles. “We had some nerves being here for the first time. It was one of those situations that you have to go through the first time.”

The last time the Lady Eagles advanced to the region tournament was in 2005.

“It’s kind of a beginning,” Knowles added. “This is tough for the seniors, but we have a tremendous amount coming back and this could be the beginning.”

Calera (20-9) held a one-point edge when Tia McCarter scored a field goal in the last minute of the third for a 34-33 Lady Eagles’ lead headed into the fourth.

Dadeville scored two quick baskets to start the final quarter to gain a 37-34 lead. The Tigers led as much as six points midway through the third, but Calera still had their chances to even the score.

“We were trying to get the shot, and if we got it we were going to sit there and face guard and try to deny,” said Knowles on the plan of attack late in the game. “Unfortunately we couldn’t get the shot to fall.”

After shooting 32 percent in the first three quarters, the Lady Eagles were unable to execute late as they were just 1-for-16 in the final quarter.

“We took three or four (shots) that looked good, but they didn’t find the bottom of the net,” said Knowles.

Perri Duncan led Calera with 16 points while shooting 5-of-11 from 3-point range. Tyesha Haynes added 12 points for the Lady Eagles.

Knowles said that after a 20-9 season where the Lady Eagles won the regular season and tournament area titles that the experience in Montgomery will fuel Calera through the offseason.

“(The experience) is tremendously valuable,” said Knowles. “I told them in the dressing room: ‘Remember how you feel right now. If you never want to feel this way again, you are going to have to have tremendous effort through the summer workouts.’”