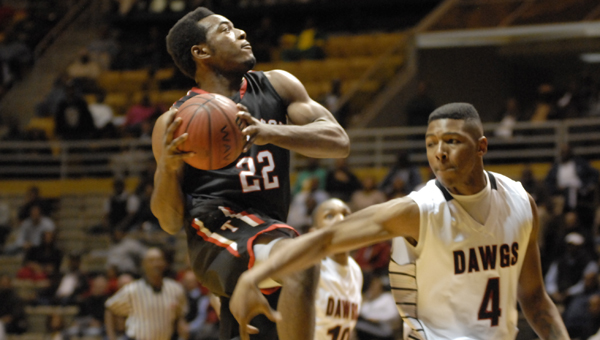 Thompson’s DeAndre Gamble led the Warriors with 25 points and 10 rebounds in their 69-49 victory over Opelika in the Class 6A Central Region semifinals Feb. 20 at Alabama State University. (Reporter photo/Mickel Ponthieux)

MONTGOMERY – Thompson High School’s DeAndre Gamble led his Warriors to the Class 6A Central Region final game with a 69-49 victory over the Opelika Bulldogs Feb. 20 at Alabama State University.

“Coach said the game is won inside the 3-point line in games like this,” Gamble said on his game. “My teammates fed me and I worked with what I got.”

Thompson trailed by two early in the first quarter, but found their rhythm with an 11-0 run to take a 16-10 lead heading into the second quarter.

The Warriors held a 20-14 advantage early in the second before Opelika responded. The Bulldogs went on a 6-0 run to even the game at 20. Opelika tied the game again with less than three minutes left, but the Warriors closed the first half on a 7-4 run to take a 32-28 lead at the intermission.

Gamble sparked a 7-2 run to start the third to give Thompson a nine-point lead early in the quarter. The Warriors found the momentum midway through the third and broke away with a 12-0 run to cap a 22-point quarter for a 54-37 lead heading into the fourth.

Rashad Strother hit a three to start a 7-2 Thompson run to begin the final quarter. The Warriors then held Opelika to just other field goal in the quarter to seal the 69-49 victory.

The Warriors finished the game shooting 55 percent from the field while shooting 6-of-13 from 3-point range.

“Most of our three’s were inside-out three’s,” said Thompson head coach Patrick Davis. “We have guys that shoot with a lot of confidence and that makes a big difference.”

The Warriors will face the Carver-Montgomery Wolverines Feb. 22 at 10:40 a.m. for the right to advance to the AHSAA Final 48 tournament at the Birmingham-Jefferson Convention Complex in Birmingham.

Thompson junior Brewer Gilliland led the Warriors to their third consecutive state championship when he won the Class 6A 138-pound... read more