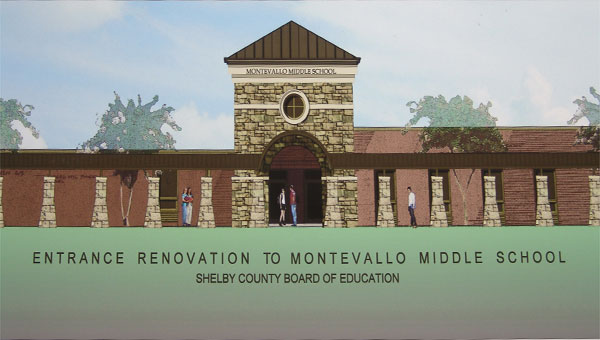 A rendering of the proposed new entrance to Montevallo Middle School. (Contributed)

The letters told specific residents in Montevallo’s Shoal Creek-Prentice Village neighborhood, which surrounds Montevallo Middle School, that the school system wanted to purchase their homes to make space for MMS improvements, according to Cost.

“They were upset because they felt like the school board was taking their homes,” Cost said.

The homes in question are located between Selma Street and Samford Street, near George Daily Park.

Cindy Warner, spokesperson for Shelby County Schools, said the school board has already purchased two homes adjacent to MMS, and is in negotiation with homeowners to purchase additional homes.

“Only a few houses are being impacted, and the others should have already been contracted,” Warner said. “We want to purchase the property without getting to the point of eminent domain.”

“We want to try to give them fair market value for their homes,” Warner said.

The purchases are part of Shelby County School’s system-wide capital improvement plan, which is funded by bond sales from the tax renewal vote. Improvements are being made to 25 county schools, including all three Montevallo schools, according to a letter sent to Montevallo parents Feb. 20.

“It’s a nice plan for all three schools, but they didn’t really get any public input,” Cost said.

The school system is working with the Montevallo Comprehensive Plan and the Shoal Creek-Prentice Village Grant, or the $450,000 Community Development Block Grant the city received in September 2012. 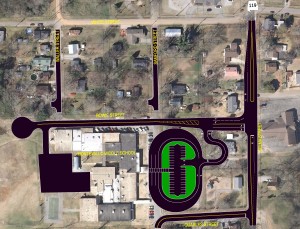 The proposed plan for rerouting traffic and building a new road in the Shoal Creek-Prentice Community to serve Montevallo Middle. (Contributed)

The city provided a $100,000 match for the CDBG grant. The grant will improve the neighborhood’s infrastructure, including new streets, sidewalks and sewer lines, Cost said.

In the proposed improvements to MMS, the school system will build a new road in front of the school, which would connect Selma Street to MMS directly. The road would improve bus and car-rider traffic flow, as well as separate bus and car traffic for students’ safety. It would also eliminate through traffic on school property, the letter stated. The plan also includes a larger parking lot behind George Daily Park and an additional parking lot behind the school.

Additional MMS improvements include a renovated building entrance and new canopy for drop-off area, gymnasium expansion with new bleachers and renovation of hallways and restrooms.