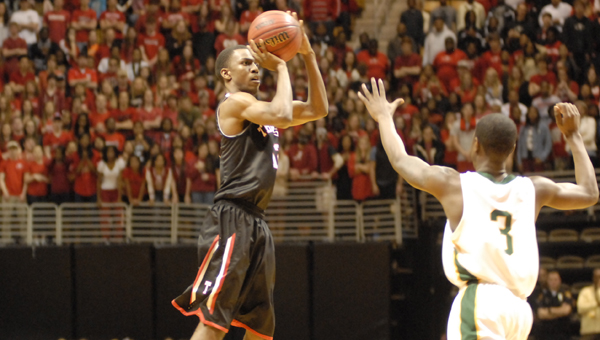 Thompson senior guard Marcus Lewis shoots for three of his 13 points in the Warriors’ 59-45 loss to Carver-Montgomery Feb. 22 in the Class 6A Central Region championship game. (Reporter photo/Mickel Ponthieux)

However, the Wolverines experience on the region championship stage showed in the third quarter when they pulled away for a 59-45 victory over Thompson.

“(Carver) made some shots early that helped them get up early,” said Thompson head coach Patrick Davis. “I thought our kids did a good job of knowing what they were trying to do. Hats off to a very good Carver team on making plays when they had too.”

The Wolverines started the game hitting four 3-pointers in the first quarter to open up high percentage shots inside the arch to finish the first half 52 percent shooting from the field.

Thompson’s Caleb Johnson hit back-to-back 3-pointers for the Warriors to spark a 6-2 run, but Carver led 18-13 into the second. Johnson then converted on a 3-point play to start the second quarter for Thompson (29-4) and Duke Thomas followed with a pair of free throws to cut the deficit to three, 21-18 with 6:38 left in the half.

Carver regained control to take a 27-18 advantage, but Johnson hit another pair of shots from beyond the arch to bring the Warriors back to within three, 27-24 with less than two minutes remaining in the half.

That would be as close as Thompson would get in the first half as the Wolverines scored twice to take a 31-24 lead at the half.

Carver started the second half on a 6-0 run to take a 13-point lead, and then held Thompson to just two baskets from the field to take a 44-30 lead into the fourth.

Marcus Lewis hit three 3-pointers in the fourth quarter to lead Thompson to a game-high 15 points in the fourth, but the Warriors were unable to cut into the deficit to fall 59-45.

“I’m extremely proud of our kids and the way they battled,” said Davis. “This group of seniors has improved. We are already proud of our program and feel like we have kids that work hard and do things the right way every day.”

Johnson finished with a team-high 17 points while Lewis scored 13 points for the Warriors. Duke Thomas added 10 points and nine rebounds.

Thompson’s Johnson and Gamble were named to the central region all-tournament team.

Thompson’s DeAndre Gamble led the Warriors with 25 points and 10 rebounds in their 69-49 victory over Opelika in the... read more