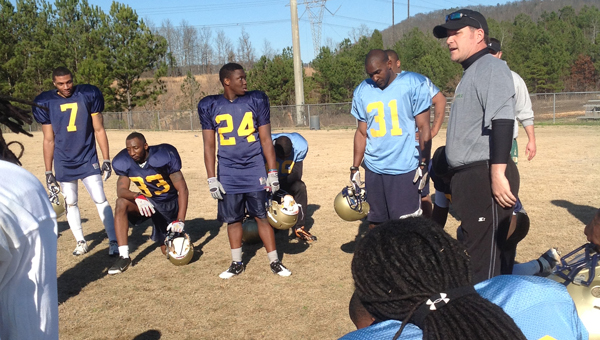 The Crusaders will hit their home field at PHS for the first time at 4 p.m. when they take on the Alabama Warriors from Morris.

“We are going to have some pretty good things happening that day,” said Dewayne Moore with Next Level Sports Management, which owns the team.

This year marks the Crusaders’ inaugural season, and the team will play all of its home games at Ned Bearden Stadium. The Crusaders are competing in the Extreme South Football League, which is in its second year.

In addition to the Crusaders, the Warriors and the Raiders, the XSFL contains the Santa Rosa Ravens from Gulf Breeze, Fla., the Alabama Tornadoes from Montgomery, the Costal Destroyers from Panama City, Fla., the Brewton-based Escambia Sharks, the Jackson, Miss.-based Jackson Patriots, the Memphis Panthers, the Prichard Falcons, the South Alabama Seminoles from Montgomery and the Walton County Chiefs from Freeport, Fla.

During the March 2 game, local elementary and middle school students who wear their school colors or logo will be admitted for free. Regular admission is $10 at the gate, and season passes are $70.

The team will hold a spring golf tournament beginning at 8 a.m. on March 14 at the Timberline Golf Club in Calera. Proceeds from the event will benefit the team and Children’s Hospital in the name of Pelham High School student Carson Sumpter, who passed away in 2011 after a lengthy battle with cancer.

For more information about the Alabama Crusaders, visit Alabamacrusaders.com.

By AMY JONES / Associate Editor HOOVER — Spain Park Theatre will put on a special performance of a prize-winning... read more