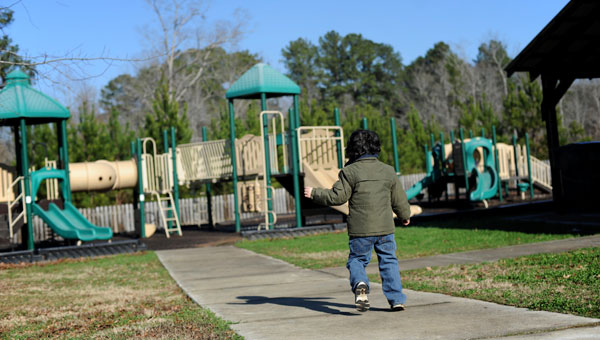 A Chelsea family stands the test of childhood cancer

As soon as his father let go of his hand, 5-year-old Elijah Seritt ran toward the Chelsea playground on unsteady legs, dark brown curls bouncing. His little sister, 3-year-old Dimitra, ran straight toward a mud puddle on tiny feet, ready to plunge in on a chilly January morning.

“I’m OK,” Elijah told his concerned parents as he pushed himself to his feet. “I’m OK.”

MORE THAN A STOMACH BUG

Elijah’s parents, Gary and Vasiliki Seritt, have good reason to be concerned every time he takes a spill, because a little more than four years ago, Elijah was diagnosed with childhood cancer when he was only 18 months old.

Gary and Vasiliki began to worry when their 18-month-old hadn’t started walking and began to vomit regularly in September 2008.

“We had switched doctors, and they thought it was just a bug,” Vasiliki said, who was six months pregnant at the time. “The doctors thought we were ‘over the top’ parents.”

Elijah then lost five pounds in four weeks and became lethargic and dehydrated. The Seritts took their son to the emergency room two or three times a week to get rehydrated.

“I was really aggravated,” Gary said. “I told (the emergency room doctors), ‘No, we’re not going home. You’re going to have to figure out what’s going on.’”

When the doctors located a mass on Elijah’s brain, he was immediately air lifted from Sylacauga to Children’s Hospital in Birmingham.

Vasiliki and Gary jumped in the car and arrived in time to watch the hospital staff wheel their toddler into the pediatric intensive care unit.

“I remember how intimidating it was,” Vasiliki said. “The surgeon said a week to 10 days, and that could have been (the end of Elijah’s life).”

During the nine-and-a-half-hour surgery, Elijah lost his blood volume, or the blood in his circulatory system, three times, Gary said, and was given a 20 percent chance to live.

“It was the longest nine-and-a-half-hours of my life,” Gary said. “It’s a really invasive surgery. They tumor had already caused damage, and they had to cause some damage to get the tumor out.”

Elijah came out of the surgery worse for the wear. Due to post-operative cerebellum mutism syndrome, Elijah’s face froze in a single expression for a month and a half. He was also completely mute, and his left side was partially paralyzed.

He stayed in the pediatric intensive care unit for three days, then on the neurosurgery floor for three weeks.

“Elijah quit breathing at night,” Gary said, remembering the long nights in the hospital. “The resident (doctor) sat there all night. We couldn’t sleep. We were all exhausted, but I knew she was in the room in case something happened.

“For 10 to 15 seconds, he would stop breathing until you shook him,” Gary added.