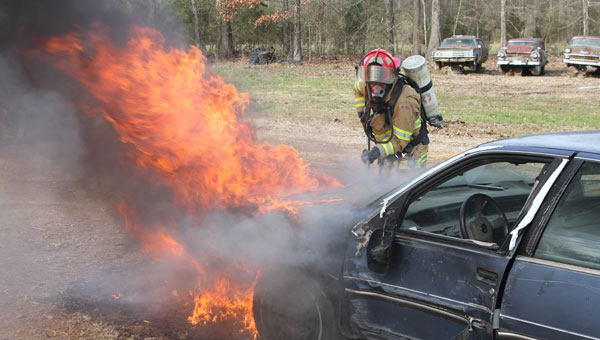 CALERA – A Calera firefighter hauled a tire from the passenger seat of a burning car and simulated administering CPR during a live fire training March 7.

The firefighters used a tire as a simulated victim trapped in the vehicle. The fire was created inside the vehicle’s engine compartment using hay and diesel fuel, so the firefighters wore full turnout gear and air tanks for protection.

More than half of the vehicle wrecks the Calera Fire Department responds to involve vehicle fires, or about 50 per year, Fire Chief Sean Kendrick said.

Kendrick said vehicle fires typically start from the heat of the engine combining with fuel, or they could begin from electrical components short circuiting in a wrecked vehicle.

The training took place at Billy’s Toyota and Lexus in Calera, where the fire department has held trainings previously.

The firefighters utilized a piercing nozzle to gain access to the burning engine compartment and extinguish the fire without standing too close.

The firefighters also added FireAde to the water, which is a chemical designed to break the water’s surface tension and make the fire cool faster. Because of this, the firefighters are able to use less water and create less run-off.

“Everyone has an assigned role, but we’re a small department, so everyone trains in every role,” Kendrick said.