Profile: Learning to be a dad 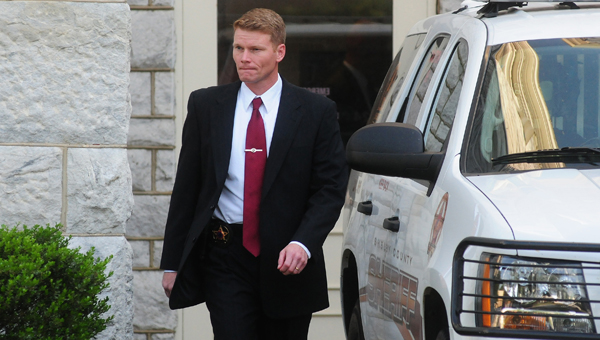 Chris George was 8 years old when he first realized his family was different. He noticed his mother slept at odd times of the day, disappeared for periods of time and was unable to hold down a steady job.

Chris later learned his mother struggled with substance abuse, although he never learned the details of her problems.

Chris and his mother, Joanne Mathes, lived with her mother, Barbara Higgins, who provided structure throughout Chris’ childhood years.

Today, Chris still uses the childhood lessons of discipline and compassion he learned from his grandmother. He’s a deputy with the Shelby County Sheriff’s Office and an assistant scout master of a Chelsea cub scout pack. More importantly, he’s a husband and father to three boys. 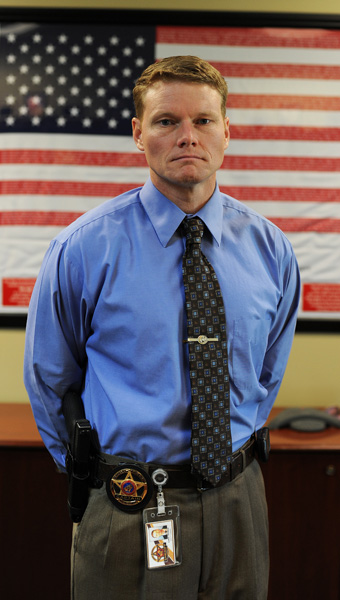 Chris George, a captain for the Shelby County Sheriff’s Office, has taken the lessons learned from his grandmother to raise his own three boys. (Reporter photo/Jon Goering)

Barbara took Chris and his mother, Joanne, in after they came home from the hospital in September 1973. Not too long after Chris’ birth, his father left the family.

“I used to be angry with him because he left us at such a young age,” he said. “When I had my oldest son, I could remember thinking how could he leave something so small and precious and feeble and dependent. I started to realize that whatever his decision was 40 years ago, it has taught me the understanding of being a dad.”

After the anger of not having a father faded away, Chris realized his father taught him the best lesson of all – how important the role of a father is.

“There was a point where I was mad at my dad because he was not there for me and wasn’t there to teach me how to fish, build things and ride a bike,” Chris said. “There was a point when I got older that I realized that his absence was his lesson. That’s what has helped me be a better father. His (absence) was the best lesson he could have ever taught me.”

With his father’s absence and his mother’s irregular presence, Chris depended on Barbara for daily love and support. She held Chris accountable even though he was a “hard-headed, stubborn little boy.”

“I wasn’t an angel and I got into trouble,” he said. “She was a strong disciplinarian.”

Barbara disciplined Chris whenever he misbehaved at school or when neighbors, who helped keep an eye on him, had to scold him for doing something wrong.

“It took me a long time to appreciate that and understand that. She was really good at doing that,” he said of his grandmother’s strict parenting style. “I went through probably what every teenage kid goes through at some time in your life when you are rebellious and defiant. It took me a while to grow out of that.”

In August 1991, shortly after Chris graduated from high school but before he turned 18, he left home to join the U.S. Marines. Chris had known he was interested in the Marines since he was a preteen. With a grandfather, two great uncles and uncle in the Marines, he said it was “a calling.”

Chris set off for boot camp, but he soon learned that just because he was legally an adult didn’t mean his grandmother was done raising him.

“Nanny’s rules were Nanny’s rules,” Chris said. “When I came back from boot camp – 18 years old and a Marine – I came back that first night at 12 or 1 in the morning and I hit one of those places in the floors that creaked and she was already in bed. She hollered out ‘Hey boy, what are you doing here so late? You still follow the same rules in this house no matter how old you are.’

“I remember shaking my head thinking that here I am just out of Marine Corps boot camp. She never gave up trying to straighten me up,” he added.

Chris was later stationed in Camp Pendleton, Calif., where he went on two “on-float” deployments and spent time in Somalia.

Chris said the Marines gave him a great appreciation for everything his country has to offer.

“The four years I served in the Marines made me have a better understanding and a better appreciation for what we have as a nation and what I have as well,” he said. “Part of that service in the military you are serving your country. That gives you great pride in wearing that uniform and being a part of something much better than (I was) the previous 17 years.”

Chris wanted to continue wearing the uniform of a public servant after his commitment to the Marines was over. He wanted to go into law enforcement or fire fighting. When a job with the Shelby County Sheriff’s Office opened up, he jumped at the chance.

He joined the sheriff’s office in 1996 and is now the investigations division commander and a 16-year veteran of the force.

A few months after starting at the sheriff’s office, Chris started a family when he married his high school sweetheart, Lisa, in December 1996. Chris and Lisa live in Chelsea and have three boys ages 8, 5 and 4. After being an only child, Chris said it’s a learning experience bringing up three boys.

“Right now I’m in uncharted bounds here,” he said. “I have three boys and I don’t know what it’s like. I didn’t have any siblings growing up. I’m having to learn this whole thing about sharing. I’m having to teach them how to share and I (didn’t) have to share.”

Chris sums up everything that he learned from his grandmother as “staying positive.”

“I don’t know how Nanny could have made it raising her own four children and then raise me,” he said. “She could have kicked me to the curb and put me in a boys’ home, but she didn’t. She looked at me faced with all this adversity and overcame it. She produced five good kids, me being included.”

Chris said he puts his grandmother’s lessons into practice every day. He said his own childhood has affected how he looks at his children and he values the chance to give his children the father figure he never had.

That fact hit home for him one day when he was scolding one of his boys for misbehaving at school.

“I was face-to-face talking to him,” Chris said. “And it was like looking into a mirror cause he’s just like me.”

Pelham is working with a real estate agent to spur redevelopment of the former Moore Handley property off U.S. 31.... read more