Profile: From player to coach 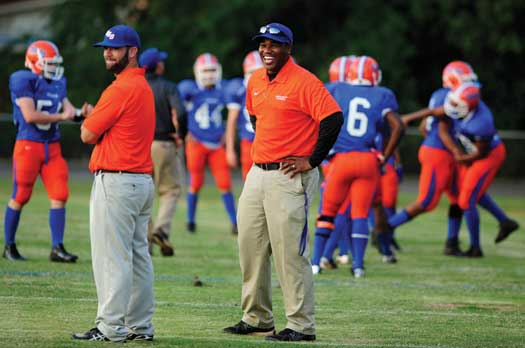 Andrew Zow supervises his team during pregame warm-ups prior to the Bulldogs’ game against Tarrant Sept. 21, 2012. (Photo by Jon Goering.)

By CLAYTON HURDLE/Special to the Reporter

He’s a player’s coach — been there, done that, with an SEC championship ring to prove it. It comes as no surprise, then, that first-year Montevallo High School head coach Andrew Zow makes it a point to build relationships with his players.

“You can say ‘I love you,’ but love is an action word,” Zow said. “We do things with the kids, like feed them dinner every Thursday night. We’ve worked hard so that they understand that we love them.”

Zow took over for the Bulldogs after a stint at Oak Mountain as quarterbacks’ coach. Now 11 years removed from his last year with the Crimson Tide, he takes many of his lessons from Alabama into his coaching philosophy.

Time with the Tide

A native of Lake Butler, Fla., Zow came to Alabama after then-head coach Mike DuBose offered him a scholarship. Redshirting his freshman year in 1997, Zow took over the starting role from senior captain John David Phillips early in the 1998 season.

In his second season with the Tide, Zow was the primary starter at quarterback and led Alabama to its first SEC title in seven seasons. After a disappointing 3-8 season in 2000, Alabama — with Zow as a senior captain — began 2001 3-2 before dropping three in a row.

“We used to pray together as a team, but that had stopped,” Zow said. “When we started praying together again we got closer together as one team and it showed.”

Zow led the Tide to a three-game win streak to end the regular season. In Alabama’s victory over Iowa in the Independence Bowl, Zow led the Tide in his final game, scoring one touchdown on the ground and another on a 27-yard pass in the game’s waning moments.

After graduating from Alabama, Zow returned to Florida where he coached at his alma mater, first as a quarterbacks’ coach and later as a head coach at Union County High School.

“It was a blessing to be back home,” Zow said. “The kids I coached already knew me because I grew up with their parents or older siblings. They saw it as someone who went off and had success coming home to give back to the community.”

During his first stint at Union County, Zow had the opportunity to mentor C.J. Spiller, who has gone on to success as a running back at Clemson and as a member of the NFL’s Buffalo Bills. Zow considers Spiller to be like his “little brother,” and said that Spiller sees him as an older brother figure as well.

While Florida is where his roots are, Zow and his wife — also a Lake Butler native — owned a house in Birmingham. They returned to the Birmingham area in 2003 when he began Andrew Zow and Associates, a corporation that represents manufacturers in utilities and automotives.

While focusing his energies in the field of business management, Zow still found time for football. He ran or participated in youth camps before deciding to go back into coaching full-time in 2007.

In three seasons as head coach back at Union County, Zow led his team to a four-game improvement in 2008, including a playoff win. After a one-year coaching hiatus in 2010 to once again focus on his business, Zow served at Oak Mountain for a year before being called upon to replace Jamie Williams at Montevallo.

Connecting with his kids

Zow has been married for 12 years to his high school sweetheart, the former Amebriss Small, and has three sons: A.J., Avry and Ashton. Carrying his strong family values onto the football field, Zow has always treated the players under his charge with respect and caring.

“When you take over a kid for more than a few hours, his parents are trusting you to mold him into a good man,” Zow explained. “You have to care for the kids for them to respect you. In turn, they respect other authority figures, like their parents and teachers.”

One of the biggest personalities on the Montevallo sideline, Zow is constantly encouraging his players to get better. The key to encouragement, he said, is being positive.

“You can’t demean them by using foul language,” he said. “The Lord has given you the ability, so use it by being a role model.”

Off the field, Zow is possibly an even bigger mentor than he is on the field. He provides dinner for his players every Thursday night and meets other needs for those who need it.

“I’ve seen several examples of guys who are having a tough time that reach out to Coach Zow,” Montevallo athletic director Brenton McCaleb said. “He takes the time to sit down with them and talk to them. He genuinely cares about them, and they see that. They trust that he’s going to guide them and that he understands where they’re coming from.”

Reaching deeply into the community

Zow is overseeing a reshaping of Montevallo football, starting with facilities upgrades and continuing by reaching out into the community.

“I got a parent to loan her artistic talents to paint the building blue,” Zow said. “It was a dull gray. The blue livens it up and helps with the attitude.”

Other adornments or the Montevallo stadium and field have helped the football team gain a sense of pride. Within the community, Zow has started a “Fifth Quarter” program at a local church after Montevallo home games. The “Fifth Quarter” is designed to provide a safe, fun environment for Montevallo High students. Zow gets a speaker to come in to talk at each event and has even spoken himself.

“From Andrew’s standpoint, it’s not just a PR endeavor,” Minnick said. “It’s who he is. He wants to make a difference in people’s lives, and he’s always willing to go into the community to connect with people.”

Though the 2012 campaign ended with a disappointing 2-8 record, there are high expectations throughout the Montevallo community for where the coach can take the team in the future.

“This season is not anything that you’d want it to be, but they’ve laid a foundation and are poised to grow,” Minnick said. “Andrew’s a fantastic young man, and I hope he’ll stick around for a long time.”

Profile: A place for children