Preserving history is his job 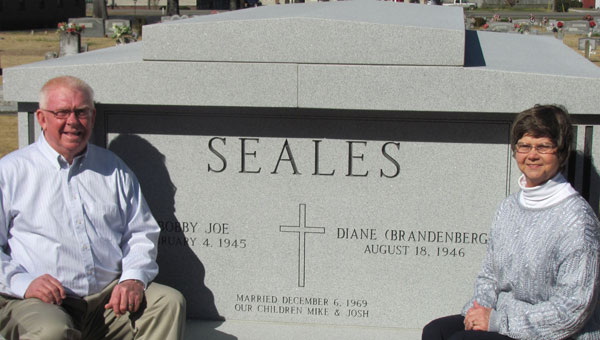 The first mausoleum at Elliottsville Cemetery belongs to none other than our county historical guru Bobby Joe Seales and wife Diane.

“After viewing many mausoleums and taking appearance, design and size into mind, the final decision was made by the two of us, as has been our custom for over 45 years.”

Permission to proceed with the mausoleum was granted by the Elliottsville Cemetery Committee, with Clark Memorials of Birmingham being retained to handle the construction. Each piece was constructed of Georgia granite, delivered to the cemetery site and assembled piece by piece.

Individual private interments open on the back side with a mounted bronze plaque on Bobby’s side which reads “Member of the Sons of the American Revolution.” The mausoleum is a beautiful work of architecture.

The Seales will be the fourth generation of family to be buried at Elliottsville with additional plots for sons Mike, Josh and their families. Family names of Fulton, Stamps, Massey and Lindsey surround the area.

After a 1999 census of all cemeteries in Shelby County showed damaged, sunken, broken and mildewed headstones along with missing birth and death dates, Seales, the avid historian that he is, chose the mausoleum route.

The Seales are both lifelong residents of Alabaster, graduates of Thompson High School and the University of Montevallo. Grandchildren are Madelyn, Molly and Parker.

Bobby Joe Seales was an internal auditor and corporate credit manager for a firm that was a division of ITT. He took early retirement in 1992. Diane retired in 2012 from Trinity Medical Center as a microbiology supervisor.

The Seales are likable, reputable, knowledgeable solid citizens doing their thing to preserve our history and advance the legacies of our future.