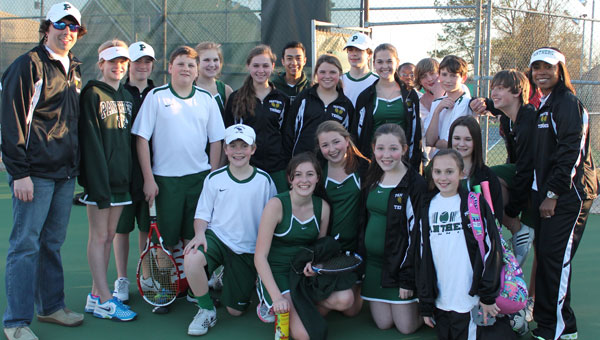 Combined middle school team of RMS and HMS and their coaches pose for a victory photo after defeating Briarwood. (Contributed)

“Seriously, a scientific study of Olympic athletes proved that those who visualized the win, who saw themselves win in their mind’s eye were more successful. In fact, their muscles couldn’t tell whether they actually exercised or visualized. That’s how powerful your brain is,” I told my eighth-grade daughter excitedly as we drove to her middle school tennis match.

The best rivalries grow out of playing those whose abilities you respect. The combined Riverchase and Helena Middle School Tennis Team suffered a tough loss to Briarwood only days before. Now, the two teams were facing off again. My daughter knew that her team was facing tough competitors.

Glancing in my rearview mirror, I saw my daughter’s eyes closed; I was impressed. Imagining her visualizing a win, I stole a longer glance as I waited at the stoplight and realized that my daughter’s eyes were not closed—just looking down at her phone as she texted with amazing speed. Fortunately, there are some coaches that kids do listen to.

The combined RMS and HMS tennis team has three coaches. Ken Vines is the city of Pelham tennis pro who works with the middle school team. Joseph Cochran, a teacher from Helena Middle School oversees the HMS team.

Shauna Stewart from Riverchase Middle School returns as tennis coach. I told Stewart my visualization story and we laughed. Stewart has an eighth-grader of her own, so she can laugh with me as a parent; however, her tennis players respond to Stewart as their coach.

Scanning the courts, jotting scores on her clipboard along with the other coaches, Stewart has a knack for encouraging players who need redirection. When she calls players to the fence, they come expectantly, look in her eyes, listen attentively, nod and smile. Usually, they go back out and win the next point.

Stewart’s players glimpse their potential reflected in the positive light of Stewart’s eyes—and that proves to be the perfect visualization. On this day, Pelham’s combined RMS and HMS middle school tennis team beat Briarwood’s team handily.