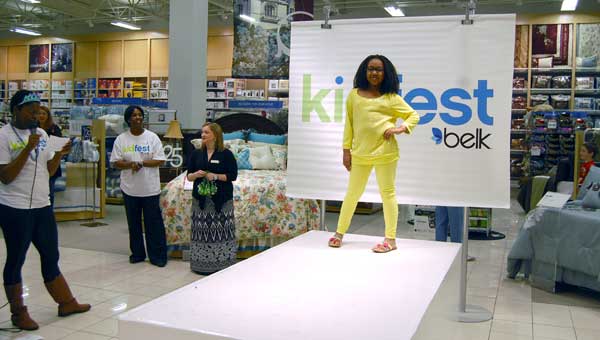 The kids modeled clothes from Belk’s spring collection during two shows on Saturday afternoon. The kids walked down a short runway as parents and other family members looked on.

“It’s a chance to give the kids something to do and let them be the center of attention,” sales associate Jasmine Prince said. “It gives the parents an idea of what new for the spring and what we have in the store.”

Prince said trends for spring include lots of color, especially coral and green, as well as dresses.

“It’s very similar to some of the stuff you’ll find in the juniors (department) – flowy tops and colored denim,” she said.

Mary Wanjiru, a 7-year-old who attends Meadow View Elementary in Alabaster, said she wanted to participate so she “could be a model.” She said her mother picked out the dress she wore for the day, and she liked it because of “the polka dots and the pink.”

Three-year-old Kennedy Head of Helena said she liked the colors of her pink and green outfit. Kennedy, who participated in Kids Fest last year, also said she liked modeling the clothes.

The event also included games and snacks for the kids. Belk is celebrating its 125th anniversary this year.

School Board could rent upper floor of new City Hall

The Alabaster Board of Education will discuss possibly renting the upper floor of the new Alabaster City Hall during a... read more