Eagles capitalize in second half for win over Pelham 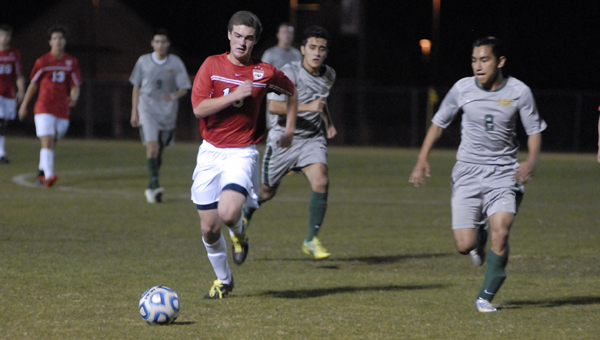 Oak Mountain’s Clay McDonald chases down a ball in the first half of the Eagles’ 2-0 area victory over Pelham March 29. (Reporter photo/Mickel Ponthieux)

NORTH SHELBY – The Oak Mountain Eagles capitalized on a penalty kick in the second half to take a 2-0 Class 6A, Area 8 victory over the Pelham Panthers March 29.

The first half featured many scoring chances by both the Panthers and the Eagles, but both goalkeepers kept the game scoreless at the half.

“Their goal keeper was very good tonight and he kept them in the game,” said Oak Mountain head coach Ryan Patridge. “I told the boys that once you get one, the game would open up because they will have to start chasing the game.”

The intensity gradually grew between the two squads and came to a point when Pelham was called for a foul on Oak Mountain’s Emilio Lerdo de Tejada to give the Eagles a penalty kick opportunity. Following a yellow card and a red card issued to Pelham, Keegan McQueen beat the Panther goalie to give Oak Mountain a 1-0 advantage with more than 27 minutes remaining in regulation.

The goal deficit forced Pelham to change its offensive game plan to even the game to send the game into overtime. The Eagles capitalized on Pelham’s push to score when Clay McDonald took a Wes Sandlin pass and scored with a shot inside the 18-yard box to give Oak Mountain a 2-0 lead.

“We went to three forwards (when we) were down a goal and we needed a tie to go into overtime,” said Pelham head coach Patrick McDonald. “We kind of overextended trying to score, but that’s no fault of the back line.”

“It’s nice to have a one-game lead on everybody,” said Patridge.