Montevallo honors its own at Citizens’ Night Banquet 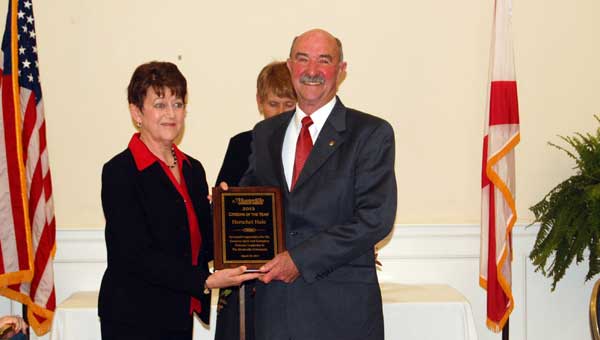 Susan Fulmer presents Herschel Hale with the Citizen of the Year Award at the the 35th Annual Montevallo Chamber of Commerce Citizens’ Night Awards Banquet March 28. (Photo by Heather Buckner.)

By HEATHER BUCKNER/For the Reporter

The evening’s program included selections performed by the Montevallo Community Chorale and the Montevallo Main Street Players. Awards given included honors like the Friend of Montevallo Award and the Civic Leader of the Year Award.

Montevallo Chamber of Commerce President Mary Lou Williams said the event is a – important tradition because it gives community members and groups, including American Village, Trustmark Bank and the Montevallo schools, a chance to come together and recognize people doing good for others.

“A perfect example of that is Herschel Hale (who won Citizen of the Year),” said Williams. “He is so involved. He’s on the city board; he volunteers at American Village. He invests so much of his time in so many projects. All of us appreciate him, of course, but at an event like this, we get to publicly thank him for those things.”

University of Montevallo President John Stewart agreed with the importance of a night to commend the community and its progress.

“National reach, national awards, national recognition would not be possible without individual work,” which should be celebrated, he concluded.

Sam Reece, a student at Montevallo Middle School, won Student Citizen of the Year for his accomplishments – one of which was building a site similar to Facebook, which the school later had to ban because of its popularity.

“It’s something when we have to change school policy because of a student,” said Principal Shelia Lewis, laughing.

“Dollar Bill” Lawson, a radio DJ from 102.5 “The Bull” was the master of ceremonies again this year and said he always enjoys spending time in the community and hearing about members’ accomplishments.

“Montevallo has a vibe about it. The college gives it a vibrancy and an energy, and the community gives it a warm, welcoming feel,” he said. “It has a lot of good things going on.”