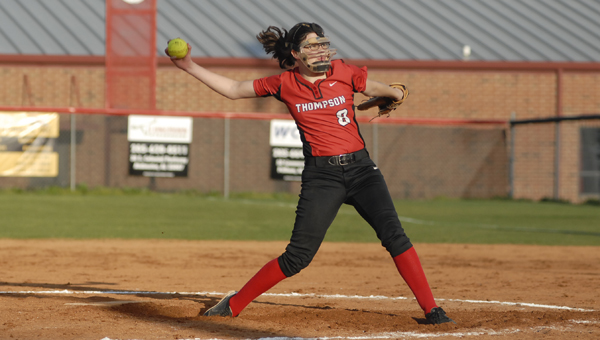 ALABASTER – The Wetumpka Indians softball team capitalized on two Thompson errors to take a 2-1 Class 6A, Area 7 victory over the Warriors April 2 at THS.

The Indians took an early 1-0 lead when Destinee Brewer reached base on a Thompson error to score Lauren Lett in the second inning. Wetumpka added a run in the fourth when Alex Christian led the inning off with a walk and scored on a wild pitch for a 2-0 Indians lead.

The Warriors (17-8, 1-1) were held without a hit until Haley Crumpton led off the fourth with a single to left. Thompson moved two runners into scoring position, but Wetumpka held the Warriors scoreless with outstanding defensive play to take way hits that could have scored runs.

Wetumpka retired the next two batters to end the rally for a 2-1 score heading into the final inning.

Crumpton finished the game batting 2-for-3 with a double and a run scored. Jones added a 2-for-3 effort and Holbrooks finished 1-for-3 with a RBI.

FROM STAFF REPORTS The Thompson Warriors scored a run in the top of the seventh to take a 1-0 victory... read more