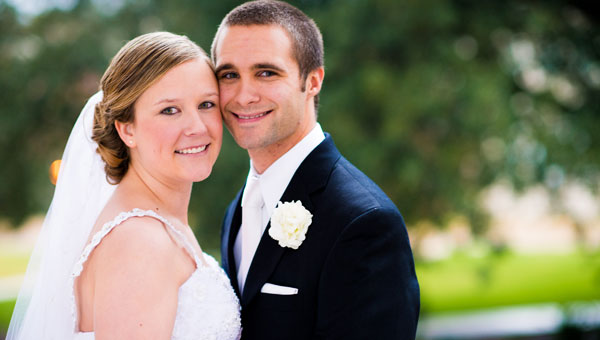 As the bride was given in marriage by her father, she wore a formal white gown with a demi-sweetheart neckline, fitted bodice of satin appliquéd in re-embroidered hand-beaded Alencon lace with a natural waist accented by rouched satin. Beaded Alencon lace flowers encrusted the satin spaghetti straps and fitted bodice, delicately gracing the skirt from the waist to the A-line skirt of French tulle into a semi-cathedral length train. To complete the ensemble, the bride wore a two-tiered veil of soft white illusion, which extended from a bun circle encrusted in the matching lace. The longest layer of the veil flowed beyond the length of the train and was accented by a border of beaded Alencon lace.

The bride carried a fabric flower and brooch bouquet designed by the bride and her grandmother with brooch gifts from special women in her family. Stems were wrapped with lace from the Mother of the Bride’s wedding dress.

Maid of honor was Arden Hall, sister of the bride, of Springdale. Bridesmaids were Ryann Mitchell, sister-in-law of the groom, of Alabaster, Lyndi Tankersley of Madison, Miss., Meagan Robinson of Kosciusko, Miss., Kristen Fowler of Clinton, Miss., and Rachel Reekers of Rock Springs, Wyo.

After a wedding trip to Montego Bay, Jamaica, the couple have made their home in Clinton, Miss.